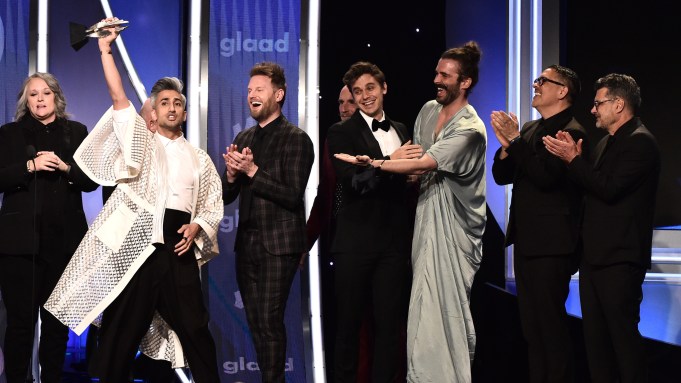 “Popular culture began to raise me even if it didn’t always represent me,” actress-activist Janet Mock told the crowd at the 30th annual GLAAD Awards honoring Beyoncé and Jay Z with the Vanguard award on Thursday night in Beverly Hills. “As a young person growing up poor and black and trans, this lack of reflection made me feel [invisible], but it all began to change when I saw Beyoncé, waving a hot comb in the air in a Houston, Texas, salon in a Destiny’s Child video for ‘Bills, Bills, Bills.’ I found the black girl hero I had always been searching for.”

For the star-studded event celebrating accurate and fair representations of LGBTQIA people in media, it was all about Queen Bey, from “Grey’s Anatomy” actor Jake Borelli’s cry of “Beyoncé!” on the red carpet in anticipation of her appearance to host Ross Mathews unveiling his 2020 presidential vote for the singer during his opener on stage.

But as presenters including Beyoncé’s former stylist Ty Hunter, Lena Waithe and Mock spoke of the couple, they were visibly moved.

Upon accepting his award, Jay Z took a moment to thank the women in his life.

“This journey is filled with highs, lows and a lot of learning,” he said. “I also want to, because I didn’t get to do it last year, honor my mother who received an award last year. I want to honor her footsteps of spreading love and her beautiful speech at the end of the song ‘Smile’ and her allowing me to tell her story. So I want everyone to acknowledge her and her strong message of ‘Love who you love.’ I’m so thankful for that. Now I’m so happy that my soul connected to Bey.”

Following her husband, Beyoncé expressed surprise for the night’s turn of events.

“First of all, I’m overwhelmed,” she said. “I would say that one of the most beautiful memories from our tour was looking on stage every night and seeing the hardest gangsta trapping out right next to the most fabulous queen respecting and celebrating each other. That’s the beauty of great partnership, connecting people who at first glance seem to be worlds apart.”

She continued: “The last thing, I want to dedicate this award to my uncle Johnny, the most fabulous gay man I’ve ever met. He helped raise me and my sister. He lived his truth. He was brave and unapologetic during a time where this country wasn’t so accepting. Witnessing his battle with HIV was one of the most painful experiences I’ve ever lived. I’m hopeful that his struggle served to open the pathways for other people to live more freely. LGBTQIA rights are human rights. To choose who you love is your human right…To Jay, I want to say I’m proud of you for making incredible strides to changing stigmas in the hip-hop community. It’s been a privilege to watch those steps and to stand right next to you.”

Outside of the Beyoncé and Jay Z mania, the night also saw “Will & Grace” star Sean Hayes honored with the Stephen F. Kolzak Award as well as nods to the film “Love, Simon,” and comedy shows “Vida” and “Queer Eye.”

For Prada, who plays a queer woman-of-color on “Vida,” change was something she had wished for, telling WWD, “I had seen shows like ‘Transparent’ and ‘Atlanta’ and I was like, ‘I hope I get to be on a show like that one day.’ I never thought it would happen so soon. It’s a blessing.”