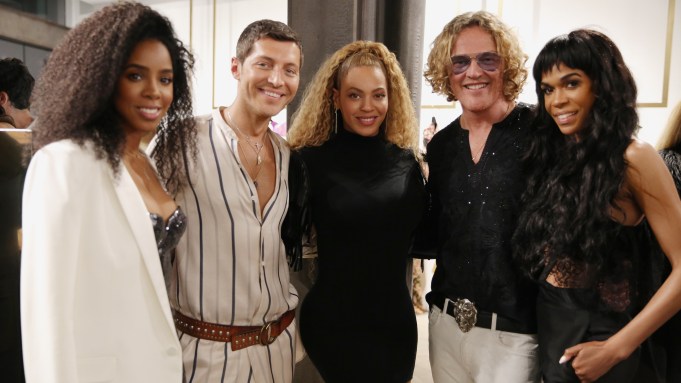 “We are travelers, always on the go, always on the move. We don’t really want to consider ourselves a company based in just one country,” said Peter Dundas, by way of explaining his “traveling flagship” concept that debuted in Los Angeles on Tuesday.

The designer had an equally high-flying guest list to help him celebrate — Beyoncé continued her Destiny’s Child reunion from Coachella by bringing Kelly Rowland and Michelle Williams to the party (they entered late through a back door and barred all photographers except for their own); Heidi Klum came to shimmy it up on the sales floor, and fellow models Alessandra Ambrosio and Charlotte McKinney also came party-ready.

The Norwegian designer, who’s now helming his own brand after designing for Emanuel Ungaro, Emilio Pucci and Roberto Cavalli, is embracing the global nature of the business. “We have our design offices in London, we produce in Italy, we show in Paris, we have our first store in L.A. We wanted something that was very personal, but we also wanted it to correspond with where we are as a company today. I really think fashion is in the process of evolving into something else and I observed that when I was working for established houses; changing with the times didn’t always leave them with an advantage. It’s a moment to reinvent, to find out what suits you,” Dundas said.

Of his star guest Beyoncé, he noted, “She was the queen, she was my number one. She was the first one to wear Dundas, because Evangelo [Bousis, his life and business partner] and I talked about who do we want to premiere the brand and premiere our vision.”

Kim Kardashian was also on the guest list but didn’t make it out on Tuesday. “We love Kim so much as well. She is so easy to work with and every time we see her we laugh and have fun and every time I make something for her, it’s a real treat,” the designer said.

Of his ability to dress European royalty as well as movie stars, he said, “I really don’t have a very complicated design formula. I want to make women look fantastic. That’s one of the reasons we want to do this store; whenever I have the occasion to go down into the shops we always find a solution.” The flagship will travel next to New York for fashion week.

Hinting about his next collection, Dundas said, “Sensuality of the Seventies will always be a part of what I do but I like to evolve with the times so maybe a more modern approach, cleaning it up a little. In my heart I will always have a little bit of a rock ‘n’ roll sensibility — that will always be on my mood board.”