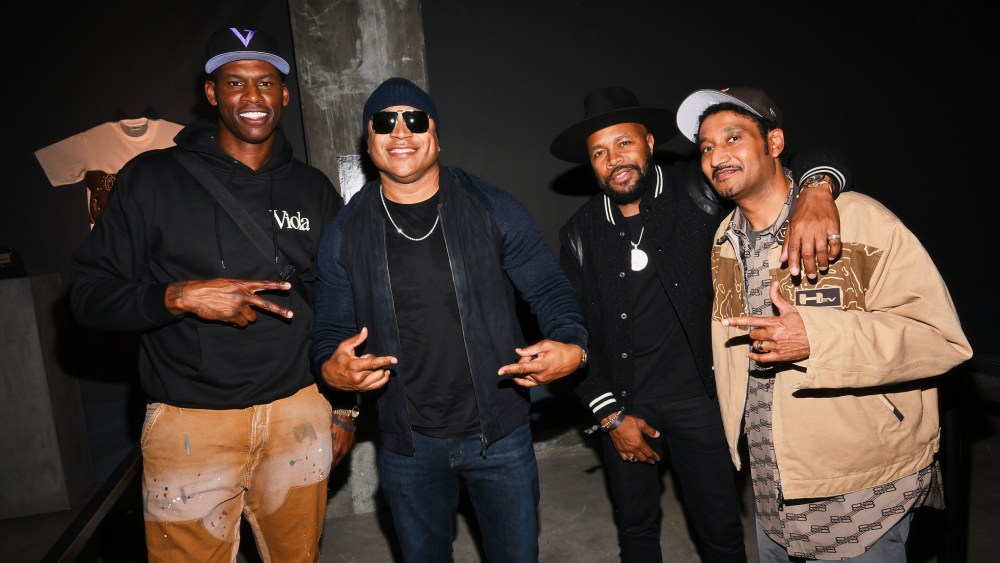 “Shout out to the Midwest kids,” rapper Big Sean told the crowd.

Sean was standing atop a white Hummer EV truck.

“Y’all having a good time? I appreciate y’all having me, GMC. This is a fire, fire Hummer. I told GMC I need mine special ordered. You know what I mean?” he said before launching into “Why Would I Stop?” from his 2020 album “Detroit 2.”

Daphne Guinness, in her signature ‘do — her black-and-white hair slicked up — was hard to miss toward the front, filming the performance.

“I came here for Sean,” she had said earlier, in oversize sunglasses and glossy red lips.

GMC was hosting a party in celebration of its campaign for its newest release, an electric pickup. It stars Sean, actor Angus Cloud, interior designer Kelly Wearstler and professional boxer Ryan Garcia. It was curated by designer and creative director Don C.

“I wanted to be able to showcase people in different aspects, in different categories,” he said. “Most of my friends are in fashion or music. I didn’t want to showcase too many. Big Sean, to me, made sense because he’s from Detroit and GMC is a Detroit brand. I thought the synergy there — he represents somebody young and fresh, that has the voice of the future. And then to be able to double back with somebody as ill as Kelly Wearstler, like on the level of design and as a woman, she is a forerunner in her category. And then with Ryan Garcia in his, somebody in sports, and then also to bring it over to Angus, a younger person who represents film. I just wanted it to be a multifaceted crew of people that I thought fit the aesthetic of this American luxury project.”

GMC tapped Don C, from Chicago, to design a collection of merch, out in November.

“Situations change, but principles remain the same,” he said of designing for multiple mediums. “I try to apply whatever good principles that is in one project and just carry it over to the others. It’s not about mimicking. It’s principles. It’s the same thought process, the same line of thought. Quality, something sustainable, and a little bit of storytelling.”

The event featured an immersive installation, “Like Nothing Else” by Showstudio, where guests — the likes of LL Cool J, Ty Dolla $ign, Paris Jackson and Devon Carlson — were invited to hop into the car to experience a virtual ride through various landscapes.

“Amazing,” Carlson, of Wildflower Cases, said of her drive. “When you steer, it changes the visuals.”

She was dressed the part — channeling a 2000s “Fast & Furious” aesthetic, she said. She wore a vintage leather Dolce & Gabbana jacket, vest and denim, paired with a studded belt and heels.

“For tonight, I thought, ‘What would I wear to a race car event?’”