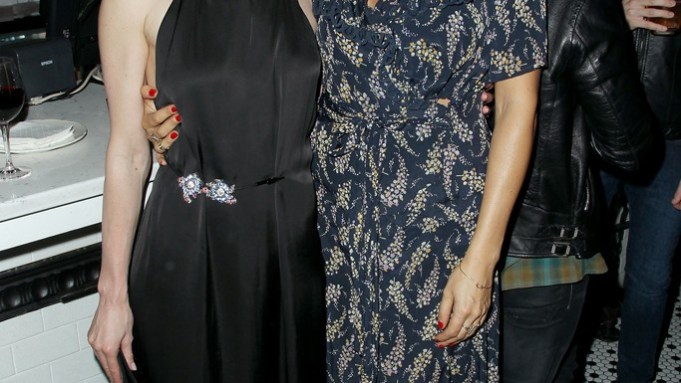 “When you see perfect, you know it,” said Polish when asked what he liked most about Bosworth’s audition for the role of Willamine “Billie” Dabney in the film, which screened at the Landmark Sunshine Theater in New York on Monday night. (The two met and fell in love on set during the filming of the movie in 2011.)

“Oh man, top-notch answer,” kidded Bosworth, arm in arm with her hubby. “You might get to go home with me tonight.”

“Take me to bed or lose me forever,” Polish, ever the film buff, shot back. (For the uninitiated, it’s an oft-cited line from “Top Gun.”)

The film is an adaptation of Kerouac’s novel of the same name. It follows the writer through three brief sojourns to a cabin in Big Sur, where he sought respite — and battled a drug and alcohol dependency — when overwhelmed by the sudden celebrity and success of his famed novel “On the Road.”

“The scene that interested me most is where [my character, Neal Cassady] gives his mistress to Kerouac,” said Lucas, who added that he relished bringing Cassady’s playfulness and wild energy to life. “Their friendship was that strange and deep. That’s maybe not the most common [thing to do],” he laughed.

For Jean-Marc Barr, who plays Kerouac, the role was hardly a stretch. “I read Kerouac when I was 18 and I decided to live it. I took off in the States, went to Europe, spent 10 years in England, 25 years in France, traveled a lot, and as an actor, I was able to maintain a real Kerouac-like spirit,” he said at the Brooks Brothers and SK-II-hosted viewing. “There was nothin’ to play.”

Around 9 p.m., guests made their way to Hotel Chantelle’s swanky upstairs lounge a few blocks south for an after party. A jazz quartet serenaded guests, who sipped on Purity Vodka cocktails and mingled with the cast.

“She was beautifully feminine and sexy,” said Yigal Azrouël of Bosworth’s depiction of Billie. “It was a little bit heavy, but it was good heavy.”

Helena Christensen said she’s known Bosworth for years, calling her a “ray of sunshine.” The model had spent all day shooting with legendary photographer Peter Beard and his giant Polaroid camera.

“I still have the makeup on from my shoot earlier. I obviously only said yes [to the shoot] so I could have myself done up for tonight,” she said.