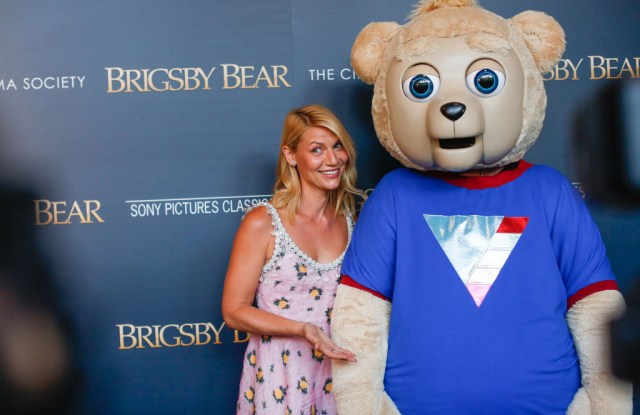 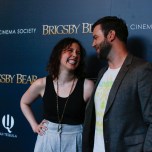 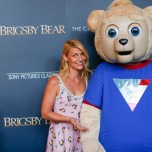 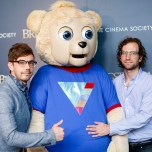 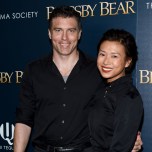 “At some point, I don’t know if I was in a dream state or what, but I was just really fascinated by this idea of a guy who is the only person to have ever seen a TV show, and nobody else has seen it,” said “Saturday Night Live’s” Kyle Mooney about cowriting and starring in “Brigsby Bear.”

The film follows James Pope, a middle-aged man who was abducted as a baby and has fostered an obsession with a childhood show, shot by one of his captors and starring a crime-fighting bear known as “Brigsby Bear.” After James is rescued from his captors’ bunker, he sets out to find an ending for the show and make an extremely late transition into adulthood.

Brigsby himself showed up for the premiere, although his agent clarified that the popular bear wasn’t available for interviews. (“He doesn’t talk,” the agent clarified.) Brigsby has been prancing around all over New York to build some hype around the movie’s release, and even made a special appearance at this year’s San Diego Comic-Con.

The film also stars “Star Wars” actor Mark Hamill, as well as Claire Danes, who was intrigued by the opportunity to try out a new role. “I play a therapist — I’ve always wanted to do that and never get to do that. I always play the person being treated rather than the person treating,” Dane said. It was also a comedic turn for the actress. “It was very appealing to splash around in that water for a little bit. It was very experimental, loose, playful and warm,” she added.

After a screening of the film, the crowd headed over to Jimmy at the James Hotel for the after party. People sipped cocktails poolside on the patio of the panoramic rooftop bar, taking in an impressive nighttime view of the financial district.

Director Dave McCary offered a takeaway for the film. “I’m the biggest fan of Kyle [Mooney], because he’s been my best friend since childhood, so if they love him, I think they’ll love the movie,” he said. “I hope the big take away is that Kyle is incredible.”