In the Hamptons this weekend, a famous horse show and Bill Clinton. 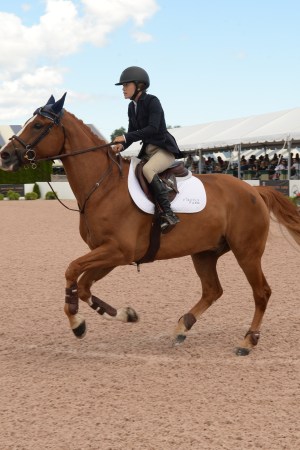 The summer is drawing to a close, and with it the social scene out East, but just before Labor Day weekend, there was one last major shindig to dress up for: the Hampton Classic.

Mary Kate Olsen, Ariana Rockefeller and Georgina Bloomberg were just some of the riders competing on the Bridgehampton grounds over the weekend and to mark the famed horse show, Rockefeller threw a dinner Friday night in the barn behind the Topping Rose House.

“It’s definitely gotten more and more exciting as the week’s gone on, leading up to Sunday,” said Rockefeller, who has been competing as a show-jumper with her seven-year old horse. Next up she’ll head to Bedford, N.Y., to compete in the Gold Cup. Around her were her husband Matthew Bucklin, and other horse enthusiasts, like Bloomberg, Elizabeth Kurpis and Kipton Cronkite.

Her fellow equestrian Bloomberg was also looking ahead to Sunday, when the Classic concluded with the $250,000 Grand Prix.

“This year I didn’t bring a top horse — usually I bring my best horse — but I came with an up-and-coming string so expectations are a little lower,” she said. “But so far everyone has been stepping up.”

Horses weren’t the only Hamptons action over the weekend. Also on Friday night over in East Hampton, Bruce Willis and Bill Murray were toasting their new film “Rock the Kasbah” at an after party at the Blue Parrot. It was supposed to be a low-key affair, but then Sir Paul McCartney, Jon Bon Jovi, Bruce Springsteen, Rudy Giuliani and one Bill Clinton all turned up. Not so low-key anymore.

Murray seemed to enjoy bonding with his costars Kate Hudson and Zooey Deschanel while filming in Morocco.

“I really got to know Kate and Zooey and Bruce and we had a lot of fun. It was fun to be over in a different world and have to rely on each other,” he said.

And what to be made of his summer out east? “It’s been relaxing,” he said. “I haven’t been this relaxed in 30 years.”