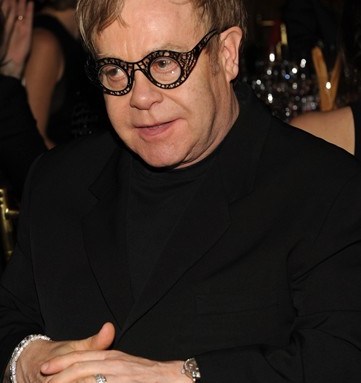 Richard Gere introduced the evening, standing in for an under-the-weather Whoopi Goldberg. Rosie O’Donnell toasted amfAR founding chairman Dr. Mathilde Krim. And anchoring it all — with a lead in from Harvey Weinstein that dished on their Martha’s Vineyard days — was former President Bill Clinton, honored for his work in the fight against AIDS. His hair may be a little whiter and his build a bit slimmer these days, but there were still plenty of lower-lip bites sprinkled throughout his speech, which mixed policy, inspiration and a dash of self-effacement to familiar affect.

“I believe that each new wave of scientific advance, not just in the AIDS field, supports both our interconnectedness and the idea that we ought to do more because we don’t even have a clue yet about how far we can go in unraveling all the mysteries of life and solving its problems,” Clinton said after another introduction from daughter Chelsea, and well on his way to his second standing ovation of the evening.

“All of us who are not 100 percent sub-Saharan African have between 1 and 4 percent of our genomic makeup inherited from our prehuman ancestors, the Neanderthals, because we occupied their same time for about 40,000 years and our forebearers intermixed with one another,” he said. “Now the two women in my family were not surprised to learn that I am part Neanderthal. They were, however, quite surprised to learn that they were, too.”

Not surprisingly, the former president was the night’s biggest topic of conversation.

“Really excited for Bill. Is he here? You can tell because there’s always a swarm of women around him,” said Liev Schreiber as he made his way into the dining room.

As it turns out, Schreiber was about half right. A fairly evenly divided crush made up of both sexes formed around Clinton during every break in the program, and he received a list of well-wishers that ranged from Dionne Warwick to Nur Khan.

Clinton’s co-honoree, Diane von Furstenberg, looked no worse for wear following her recent skiing mishap, the work, husband Barry Diller told the crowd, of “this idiot out-of-control skier.” Von Furstenberg came equipped with a hand fan to shield her face, though she ditched the accessory to applause upon arriving at the podium. Even as she was picking up her own award, the designer felt compelled to mention Clinton.

“Still our hottest president,” she observed.

Elizabeth Taylor, yet another of the evening’s honorees, couldn’t attend for undisclosed reasons, but Elton John honored her spirit by wearing a very large, very sparkly ring he said belonged to the Dame. After an auction that added to the night’s $1.5 million take, John, Warwick, Stevie Wonder and Gladys Knight turned the evening back yet another decade with a performance of their 1985 amfAR-benefiting single, “That’s What Friends Are For.”

“I’ve been teased, on several occasions, by Clive Davis, who said, ‘There you go again. Gave up the biggest record of your entire life,’” Warwick explained. “I said, ‘Yeah, but guess what? Look at all the good it’s doing.’”