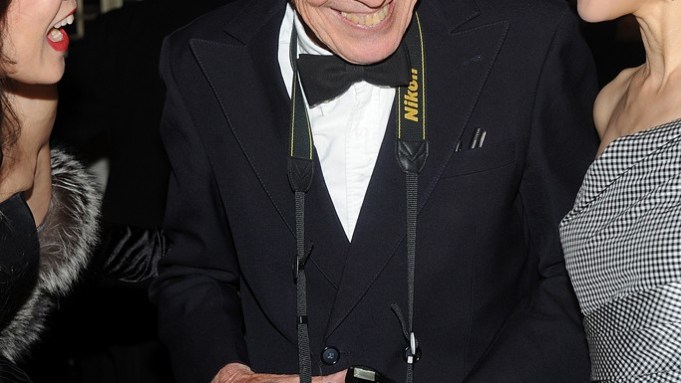 Instead of mingling with friends and fans before Monday night’s Carnegie Hall Medal of Excellence award dinner at New York’s Waldorf-Astoria, guest of honor Bill Cunningham was a few flights up doing what he does best — shooting another event.

Unaccustomed as he is to being the center of attention, once The New York Times lensman joined the festivities he pretty much beamed all night. In a tuxedo instead of his signature blue French workwear jacket, Cunningham hugged it up with gala chairs Annette and Oscar de la Renta and Sarah Jessica Parker. The crowd of 450-plus including Sanford Weill, Mercedes Bass, Tina and Terry J. Lundgren, Agnes Gund, Kim Hastreiter and Christine and Stephen Schwarzman helped raise nearly $1.5 million for music education and community programs at Carnegie Hall’s Weill Music Institute.

Cunningham had his trusty Nikon around his neck during the cocktail hour, but he was camera-free by the time Weill handed him the award. After bounding to the stage, grinning ear-to-ear and proudly displaying the gold medal on the edge of the podium for all to see, the photographer enthused about a few of his favorite subjects, starting with Annette de la Renta, whose heartfelt remarks preceded Weill’s. During his 20 minutes of thanks, Cunningham laughed, praised, dished and at times stopped himself to regain his composure. With the crowd on its feet, he opened with, “What can one possibly say? I mean, I’ve been struggling with it and I have made a few notes,” as he displayed a printout that looked like a list long enough for Santa Claus. “Everyone in this room, I mean, that’s why I’m here. It’s because of you.”

Cunningham couldn’t resist a few zingers, though. “What I admire most about you is what you do for charities in New York. Nowhere else in the world do they know this. They’re going to get to know this in Europe with this financial crisis. They’re going to have to get off their butts and raise money,” he said.

“There are cynics who say, ‘All you people go out to show off your fancy dresses and have parties.’ First off, I am not fond of photographing women who borrow dresses. I prefer parties where women spend their own money and wear their own dresses.…When you spend your own money, you make a different choice,” he said.

Noting how the Times had “opened the doors of the world to him,” the Schwinn-riding, fast-shooting octogenarian said, “I’m just the fluff. I fill around the ads, if we have any.”

He was just as candid about his early hatmaking days, saying, “My millinery shop was no big deal. I didn’t make any money but I paid my bills.” Now more than 60 years on, Cunningham, a longtime resident of an apartment above Carnegie Hall, described how he still rushes down to Fifth Avenue every morning to shoot stylish women on their way to work. “Between 8:30 and 9:30 is fabulous,” he said. “Today women are dressing the insides of their heads as well as the outside. I come away thinking, ‘This is unbelievable. It could not happen anywhere else in the world.’”

Before turning the stage over to tenor Vittorio Grigolo, Cunningham said, “There are cynics, who think the parties are just for ladies who want to dress up. That’s a lie. It’s not that way at all,” pulling himself together. “It is an American tradition of giving back to a country that has given us everything.”