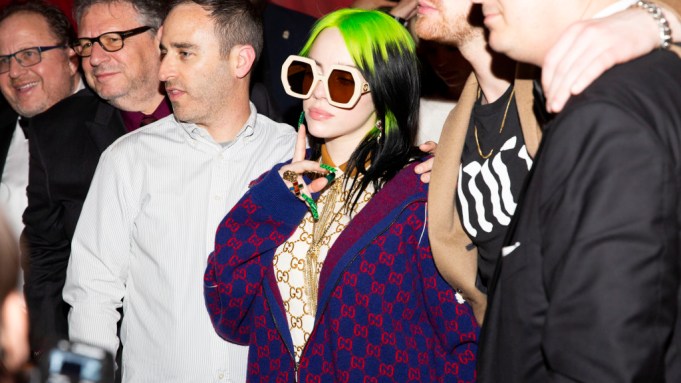 Billie Eilish — the second artist in Grammy history to sweep all four major categories including album of the year — was at Universal Music Group’s after party for all of about 30 minutes. She stopped briefly for red carpet photographers in her Gucci look before dashing straight inside to a closed off VIP section, where she posed with brother and collaborator Finneas O’Connell, the record label’s chief executive officer Lucian Grainge and manager Justin Lubliner.

“Although I like a variety of people to earn awards, because there’s so much music out there, and this is a great time to recognize that, I still feel like she has such an original voice, her music is very catchy,” said singer-songwriter Lisa Loeb. “She deserves every award she got.”

The party, held at Rolling Greens in Downtown Los Angeles, was also attended by rapper YG, who honored Kobe Bryant by sporting a number 8 L.A. Lakers jersey while holding hands with singer Kehlani. News broke of the basketball star’s death Sunday morning, which left a dark cloud hanging over L.A. and Grammy day.

Meanwhile in Hollywood, Sony Music Entertainment threw its party at NeueHouse, which was closed off to press. Winners who made it out included Rosalía, who received Best Latin Rock, Urban or Alternative Album; Lil Nas X, who took home two awards including Best Pop Duo/Group Performance for “Old Town Road” with Billy Ray Cyrus, and John Legend with DJ Khaled, who both earned Best Rap/Sung Performance alongside the late Nipsey Hussle. Usher was also out for Sony, as were a slew of artists including Camila Cabello, Koffee, FKA Twigs, H.E.R., Machine Gun Kelly, Noah Cyrus, Cyndi Lauper and Diplo — who also stopped by Republic Records’ bash at 1 Hotel in West Hollywood. Others who came out were Jessie J with Channing Tatum; models Winnie Harlow and Margie Plus; singers Tinashe and Madison Beer; rapper Rich the Kid; “Euphoria” actress Sydney Sweeney, and actor Dennis Quaid.

“I feel like most of the parties are quieter than normal,” shared a seasoned party photographer. “It’s a gloomy day.”