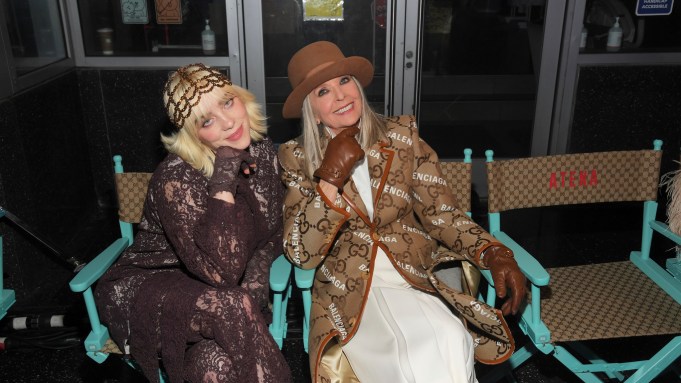 “I can’t believe we’re standing in the middle of f-cking Hollywood Boulevard,” exclaimed Sienna Miller, alongside Serena Williams and James Corden, echoing the sentiments of just about everyone at Gucci’s Los Angeles show on Tuesday night.

“It’s insane,” said Gucci beauty muse and Surfbort punk frontwoman Dani Miller of the Italian house’s takeover of the street — closing down the stretch from North Orange Drive to North Highland Avenue. “Gucci Love Parade” read the marquee at the lit-up El Capitan Theatre, across the street from the TCL Chinese Theatre, both dating back to the ’20s. “We’re hanging out on Hollywood Boulevard. It’s mind-blowing. I feel like I’m on ecstasy, and I’m completely sober.”

The Los Angeles landmark, typically filled with visitors strolling the Hollywood Walk of Fame, was completely cleared. Directors’ chairs adorned with the Gucci logo and names of movie stars or Greek gods — seating for the show — lined the shut storefronts, and at the center was the runway, showcased with dramatic spotlights and Old Hollywood music as the soundtrack. It looked like a movie set, remarked Selma Blair.

“What a feast for the eyes,” said the actress, in a sequined Gucci minidress and tights. “We have been so in need and so thrilled that Gucci has done this for L.A., for us. We needed a real injection of a little glam and possibilities and space. It’s incredible.”

What she particularly loves about Gucci, she said, is how inclusive the brand has been.

“To be doing incredibly beautiful, momentous things, and also truly giving back — Gucci has been really in the forefront,” she continued, noting the house dressed “Crip Camp” director James Lebrecht, who she had been chatting with moments earlier, at this year’s Oscars. The film, nominated for best documentary, recounts the experiences at a ’70s summer camp for teens with disabilities.

“Can you believe this shirt?” asked Lebrecht, showing off his floral button-down Gucci top. “Can you just believe this incredible shirt?”

Like Hollywood Boulevard, with “the music and the incredible lights,” he felt “transformed,” he said.

“You put it on and you feel like something inside of you lifts up,” he said. “The statement of saying, we want to dress someone like myself, who’s a wheelchair user, in our clothing to represent our brand, not only at the Oscars but tonight, is incredibly meaningful. It’s meaningful to a lot of people in my community that we are being seen for who we truly are, which are beautiful, creative people. And we often don’t get portrayed like that. Moments like this help push the bar forward to say, ‘Where are our movie stars for my community?’ Well, the more that we are seen in public, that we are part of this community, the sooner that’s going to happen.”

“Alessandro is one of a kind,” said Miller of Gucci creative director Alessandro Michele, who put her — and her signature gap-toothed smile — on Gucci’s first beauty ads. “Music, painters, every type of artist, and no matter where you’re at in life, he just sees you for your true self and really bring you out and celebrates you.”

“My friends around the world are, like, ‘You’re smiling at me at the mall,’” she said of the campaign. “I’m like, ‘Yes, keeping the spirit alive.’ My work with Gucci is just about celebrating your true beauty, however that is for you. And I’m happy that Miley Cyrus is now in there, being the face, too.”

“Take your seats,” urged passersby. “The show is starting.”

“Can you help us find our seats?” asked Olivia Wilde with Thomasin McKenzie, before joining the celebrity-filled section.

There were familiar faces in the show, too. Jared Leto, Phoebe Bridgers, Jodie Turner-Smith, Macaulay Culkin, St. Vincent and Miranda July walked the runway, which closed with Björk’s “All Is Full of Love.” (The show was an ode to Hollywood, of course — to the city’s “mythology of the possible,” as Michele penned in a letter — but also to his mother, who worked as a film production assistant.)

How was playing model?

“It was fun,” Leto said at the show’s after party, held at The Hollywood Roosevelt’s outdoor Tropicana Pool & Café. The actor was busy indulging fans with selfies in a tucked away section filled with seating. There was Michele, holding court, Cyrus and Eilish.

“This place is huge,” said Eilish, noticeably in high spirits in a lace number and beaded headpiece, when she first walked into the space. The pool had been covered with a black-and-white checkered dance floor.

“It was sick,” she said of the show, no stranger to a Gucci production. “I was very impressed but not surprised.”

For professional skateboarder Nyjah Huston, it was his first “big” fashion show, he revealed.

“Man, it was everything I expected and a lot more,” he said, bare-chested in a suit.

He could be found on the packed and sweaty dance floor hours later, along with Tyler, the Creator, Beck, Petra Collins, the Johnsons, Welch and July — all letting loose as Ronson spun. At the center, headline-making couple Mescal and Bridgers danced and kissed, turning heads. And at the very front was Lizzo — in a Gucci coat, sparkling necklace and barrettes in her hair — with her crew, singing along to every word of “Uptown Funk.”

“Take a picture of me and Dapper Dan, please,” she asked as she was leaving. It was close to midnight and the party was still going strong. “With flash, please.”