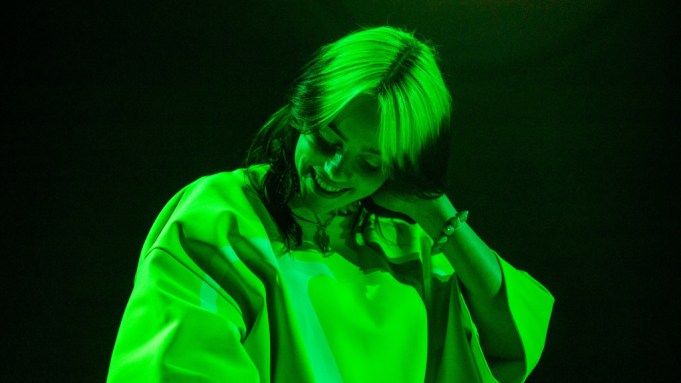 “I look extra as f–k right now,” said Billie Eilish at Spotify’s annual pre-Grammy party in Los Angeles — the hottest ticket of the week. “This outfit is stupid.”

The 18-year-old rising star was sporting a head-to-toe neon yellow look as she sat onstage with brother and bandmate Finneas O’Connell. The two performed a stripped-down set that included hit “Bad Guy” and the song that put her on the map, “Ocean Eyes.”

Onstage, Eilish continued, “I came here like I was too cool,” she said, taking off her matching sunglasses. It was about 9:30 p.m. inside the dimly lit venue, The Lot Studios in West Hollywood. She shrugged. “Grammys are on Sunday. This s–t is crazy.”

Eilish — who’s made history as the youngest person to be up for the top four categories including Album of the Year — was one of many performers on Thursday night to be honored for their Best New Artist nomination.

There was “Truth Hurts” singer Lizzo, funk and soul duo Black Pumas; indie darling Maggie Rogers; musical group Tank and The Bangas; Lil Nas X with Billy Ray Cyrus, who delighted the crowd with their “Old Town Road” duet; Spanish singer-songwriter Rosalía — raising the bar and energy with back-up dancers (performing “A Palé,” “Malamente” and bringing out reggaeton star Ozuna for “Yo x Ti, Tu x Mi”) — and English country-soul singer-songwriter Yola, who stunned the audience with her vocals. She was “overwhelmed,” she admitted earlier in the night.

“I’ve gone from living on the street in London to being here on the red carpet,” shared the artist, who’s been candid about her past struggles of living in poverty. “It’s insane.”

She’s been making music for more than two decades, for years working on projects that were never her own. “I’ve always had people trying to keep me in my box, because my skill sets were useful,” she said. “For once, I’m actually building something that will sustain me instead of sustaining someone else.” She has four Grammy nominations total.

“It’s too intense to actually adsorb, so you don’t,” she said of the drastic lifestyle change. “It’s too much emotion.”