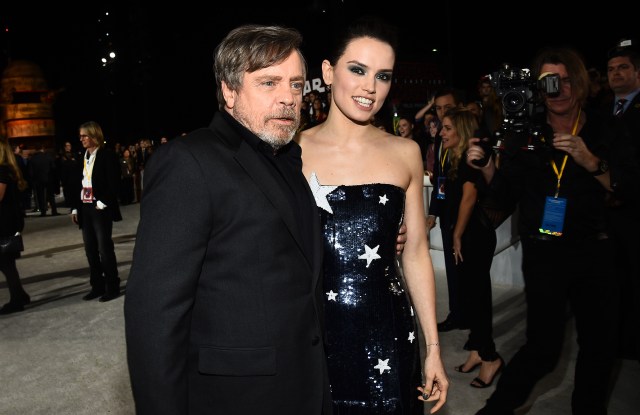 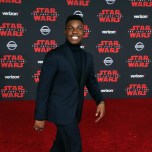 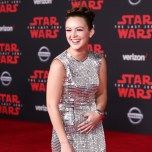 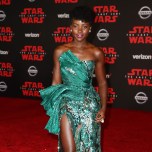 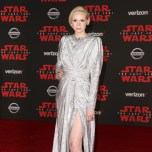 The geographic location may have been Los Angeles’ Shrine Auditorium, but the feeling was a long time ago in a galaxy far, far away as guests attending the world premiere of “Star Wars Episode VIII: The Last Jedi” strolled onto the red carpet beneath a towering AT-MG Walker and found themselves rubbing elbows with C-3P0, R2-D2, BB-8 and a cadre of Stormtroopers.

But the real luminosity came from the film’s stars, who were eager to debut the latest chapter in the space saga, as well as pay tribute to one of its original stars, the late Carrie Fisher. “I really want to take Carrie’s example and be an honest, authentic human being,” said Kelly Marie Tran, who was only recently plucked from obscurity to star as new character Rose Tico. “I think it’s harder said than done, especially when you have so many people looking at you. It’s something that I strive for and I think that she was the best example of that.” The actress sported a red Thuy Nguyen piece for her first red carpet.

As returning star Mark Hamill clowned for the cameras, and new trilogy hero John Boyega was greeted with cheers from his costars as he arrived in the nick of time after nearly being snowed in while shooting in Atlanta, Daisy Ridley enjoyed a literal star turn in a strapless, sequined midnight blue Monse gown with fringed slits. Ridley said that she took Rey’s status as a role model to heart, and offered advice to aspiring Jedi facing tough odds. “I would say ‘Have hope, kids!’ It always may not be as it seems,” she offered.