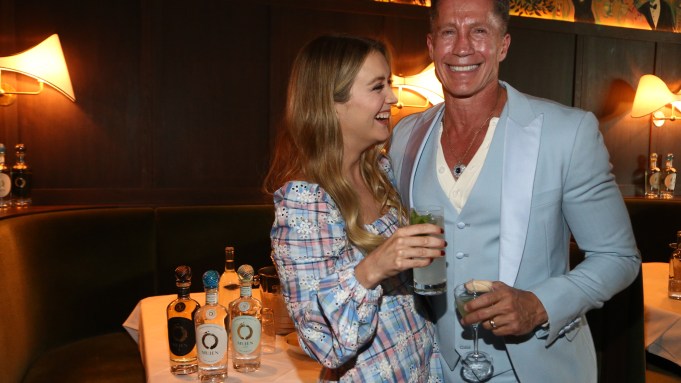 Stepping into their party, Billie Lourd and her stepfather Bruce Bozzi are matching — both in baby blue.

“It wasn’t intentional, but we’re in synch,” exclaimed Lourd, bubbly and smiley, in an Autumn Adeigbo dress. “It tends to happen.”

“It really was not on purpose,” chimed in Bozzi, wearing a custom ’70s-style suit. (It was inspired by “tacky tuxedos” of the era, along with John Travolta’s look in the opening shot of “Saturday Night Fever.” It’s a creation by the family tailor, “Mario in Beverly Hills.”)

“It does end up happening a weird amount,” said Lourd. “And we even match the bottle and didn’t mean to.”

While Bozzi — former co-owner of The Palm and husband to CAA talent agent Bryan Lourd — and business partner Sondra Baker began rolling out the distilled spirit (crafted in Japan for more than 500 years) in November, this was their official launch party, and Lourd was tapped as hostess.

“I was so excited to host this, because Bruce has been working so hard on creating this incredible brand, and I’ve been wanting to support him as much as I can,” said the 29-year-old actress, daughter of Lourd and the late Carrie Fisher. “It’s been so hard with COVID-19. We haven’t been able to do events and be out and do things like this. And when this opportunity came up, I jumped at it and was so excited. It’s a real family brand for us. We’re really doing it all together. A bunch of my friends are here, and his friends.”

“Ultimately, Sondra Baker brought me into it,” explained Bozzi of Mujen. “She was the visionary of this.”

The two first met in the ’90s at a gym in L.A. called Sports Connection. They were running on adjacent treadmills.

They reconnected years later, finding themselves on the same school yard when their kids were in first grade (Bozzi is father to a pre-teen, Ava.)

Baker (who has a background in tech) discovered Shochu through her husband, and after learning that, when made with rice, the liquor is free of sugar, carbs and gluten, she saw an opportunity for a “healthier” spirit.

“I told my husband, I want to start this business, and if I do it, I want to do it with him,” Baker said of Bozzi. “He was involved before he even knew he was involved.”

They visited distilleries in the Kumamoto region of Japan, landing on a 119-year-old family-owned spot run by the founder’s great-granddaughter. They offer three Mujen bottles: “Ai Lite,” made with 23 percent alcohol, the “Original,” with 35 percent (intended to be mixed in cocktails, which were enjoyed at the party — names like “Tokyo Lemonade” and “Rosé Spritz,” created by mixologist Ash Miyasaki), and “X,” a brown-colored option, with 42 percent alcohol, aged for 10 years. Diane von Furstenberg is among the investors.

“She’s a very dear friend of mine, a very old friend of mine,” said Bozzi. “Her and [husband] Barry [Diller] — I brought it to their home for dinner, and she was like, ‘This is amazing. How can I be involved?’”

Mujen can currently be purchased online in 45 states via direct-to-consumer and available at select locations in New York and Los Angeles, found at L.A. hot spots like Alexander Wilmot-owned Gigi’s — the location of choice for the party — Jeff Klein’s The Tower Bar, private members club San Vicente Bungalows, as well as at The Grove’s Monsieur Marcel and The Little Door on Third Street.

“We didn’t know that they were going to have a four-hour commercial of Mujen on there,” joked Baker. “Anderson has the best quote in the history of mankind. He said, ‘It’s like a lovely siren licking you from the sea of Odysseus.’”

Laughing, she added: “I’m going to make T-shirts of that.”