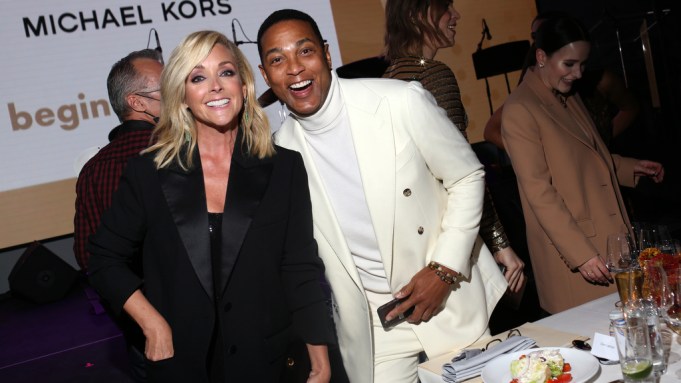 Even Michael Kors is buzzing over the Harry Styles concert.

Monday evening, Kors was in demand as ever, performing host duties at the 15th annual Golden Heart awards benefiting New York-based charity God’s Love We Deliver. After presenting in a virtual format in the fall of 2020, the event was back, this time held at West Side event space The Glasshouse, to a packed house. For Kors, the return of the event was just as exciting as Styles’ Madison Square Garden concerts over the weekend.

“Listen, after we’d had an in-person fashion show live, back to the theater for opening nights, Harry Styles and then to be able to celebrate an organization that means so much to me, in person and see everyone come out and celebrate — it’s very exciting,” the designer said.

A big Broadway lover, Kors has been to several shows since reopening, including “Passover,” “Six” and “The Lehman Trilogy,” of which he is a producer. Little did he know that the night would end with a surprise Broadway Inspirational Voices performance in his honor — but first up was recognizing the night’s honorees: Billy Porter and Don Lemon.

“God’s Love is all about community. Both of them, these are people to look up to,” Kors said of Porter and Lemon.

GLWD was started in New York during the AIDS epidemic, bringing meals to New York’s most vulnerable, and today continues to serve medically tailored meals to people living with illness who are unable to shop, cook or feed themselves. The organization saw a 30 percent increase in demand during the height of the pandemic last year, and thus fundraising was on the evening’s agenda — as well as a good time.

Ahead of dinner, Lemon shared why it’s important to be out supporting events like the Golden Heart awards.

“I think it’s important for us to be aware, be engaged, and to stand up for what’s right, especially in this time when so many things are trying to be turned back and could be turned back,” the journalist said. “It’s important for us to be outspoken and engaged. It’s not a political message, it’s just what’s right, and what is godly. I think that’s important about now. The reason that I’m able to be here and stand here and live an openly gay life without shame and hiding and all of those things is because of the founders of God’s Love and people like that.”

Porter accepted his award virtually from London, and told the crowd that “it’s moments like this that remind me of our power. Don’t forget your power. We are all in this together.”