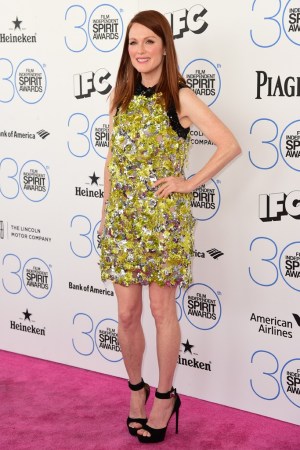 As expected, Julianne Moore took home Best Actress honors at Saturday’s 30th annual Film Independent Spirit Awards, but she managed to sneak by reporters on the pink carpet in the Santa Monica beach tent. Reporters instead were focused on Oprah Winfrey’s every word. “I’ve really got to get to my seat,” sighed Winfrey, although she took the opportunity to plug nominated film “Selma” and the film’s star, David Oyelowo. “He has become one of the dearest people in my life, which is saying a lot because I did not think at this point in my life that I’d be making new friends nor did I need new friends, but I saw in him some of the same spirit of myself and I wanted to do whatever I could to open that space for him.”

Earlier, the show’s hosts Kristen Bell and Fred Armisen each walked the pink carpet where Bell found a friend in Emma Stone and Armisen warmed up his vocal chords by chatting up press by discussing the designer of his suit. “It’s by my cousin who just turned 89 and it was his 89th birthday and he said, ‘I made a suit for you and it’s made out of napkins.’” His publicist shook her head and whispered, “It’s by Topman.”

“Whiplash” star Melissa Benoist was more eager to talk fashion. “This feels like a dream,” she said, describing her Maiyet gown. “I have a little dog who loves sitting on my lap while I get my make-up done. She thinks she’s getting pampered too, but the second I put the dress on, I had to put her away.”

Rene Russo admitted her routine rarely goes as smoothly. “It’s always hell! It’s like my dress doesn’t fit—blah, blah, blah. We’re always rushing,” said the actress, who later teared up as her writer/director husband Dan Gilroy went on to win two awards for his film “Nightcrawler.” “I’m so proud of him. It’s cool. I’m really happy for him.”

There were no surprises among the acting winners: Moore, Michael Keaton, Patricia Arquette, and J.K. Simmons, but it was a previous Indie Spirit winner who turned heads backstage.

When asked how she’s preparing for the Oscar ceremony, she cracked, “It’s tomorrow? I mean, you know… It’s very exciting. Obviously, I’m very excited to be included.” Though she insisted she wasn’t yet focused on the big day. “You can’t get ahead of yourself, man. One day at a time. Honestly, it’s been so amazing. We actually started shooting [Still Alice] last year, the day after the Oscars,” she said, adding, “We all had to go to bed early and couldn’t see the end of the Oscars.”

While the redhead said she’s most looking forward to “eating” once award season concludes, Keaton—surrounded by “Birdman” co-stars Stone and Zach Galifianakis—admitted he wasn’t quite prepared for the season to end: “I’m going to miss all of it. I’ve enjoyed it. I’ve got to be really honest with you. I’ve liked it. We’re all acting like it’s so grueling, but I’ll probably be in the fetal position and bawling in three months.”