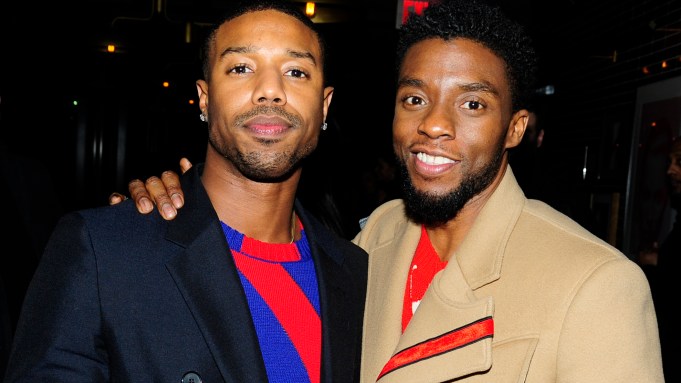 An electric current of enthusiasm surged throughout the New York premiere of “Black Panther” on Tuesday evening in New York. The special screening, hosted at the Museum of Modern Art by The Cinema Society, became a standing-room-only affair as excited guests poured into the museum’s movie theater to catch a glimpse of this season’s most talked-about feature, which opens nationwide on Thursday.

“It’s not a movie, it’s a movement,” said Tyra Banks as she paraded proudly down the tightly packed red carpet. “This is the self-esteem and boost that my community not just needs right now but deserves.”

The fantasy film, which is only the third feature-length project from 31-year-old director Ryan Coogler, is based on the Marvel superhero and is set in both present-day Europe and the U.S. but centers around the highly advanced African kingdom of Wakanda with actor Chadwick Boseman playing the titular role.

The 41-year-old actor, who has also portrayed African-American baseball pioneer Jackie Robinson and former Supreme Court justice Thurgood Marshall, is keenly aware of the importance of being a part of history’s first all-black superhero film. “There are so many things happening right now in terms of identity and the industry,” Boseman said. “There’s an empowerment [happening] that’s [being shown] in this movie.”

Although the story and setting are fictionalized, the leading actor explains how “Black Panther” illustrates a shift in the way black culture is explained within a historical context. “What you’re seeing in this movie is African people not explaining themselves based upon European structure or according to a European timeline. Usually anytime we tell a story, it starts after slavery or starts because of slavery and colonialism.”

For his part, Coogler revealed his passion for this project stemmed partially from a lifelong quest to learn “what does it means to be African?” The Oakland, Calif., native spent several years on the continent in preparation for writing and directing the blockbuster project. “I’ve made three films so far and this is the one that’s given me the most back as an artist,” he explained.

It was a busy night for Boseman and costars Michael B. Jordan, Lupita Nyong’o and Letitia Wright who all decamped to the Calvin Klein show between their own red carpet and the screening’s after party at The Skylark lounge overlooking midtown Manhattan.

Wright, the 24-year-old actress who plays the brilliant-minded younger sister to Boseman’s Black Panther, explained how she envied her character’s “dope fashion sense.” The Guyana-born beauty had an epiphany as she verbalized her thoughts on playing “an African princess who is the smartest in the whole world.”

“Wow — it just hit me that I’m playing that character,” said Wright ahead of the screening. “That’s amazing. Wow. I hope other young girls can feel [that] smart, too.”

Stylist June Ambrose was happy to take a breather from a nonstop New York Fashion Week schedule to attend the premiere. “I have to choose this over Calvin — love you Calvin, but yeah I’m happy I’m here.”

“Hamilton” actor Bryan Clark had to skip the screening, but rushed from the theater after Tuesday’s curtain call to join the “Black Panther” cast for the after party. Clark’s godmother, actress Angela Bassett, plays Boseman’s mother in the film and the stage actor urged her to avoid speaking about the film until he is able to see it “later this week with the general population.”

Clark, who last month assumed the role of George Washington in Lin-Manuel Miranda’s hit, knows a thing or two about being involved with a much talked-about project, as has already been the case with the social media reaction to “Black Panther.”

“It’s the same thing with ‘Hamilton,’ right?” he proposed. “There’s a lot of buzz and then people ask if it lives up to all the hype. Right now there’s a push for diversity and acceptance and inclusion in our political climate, but if the work is good then the world will respond.”

World Traveler Paris Hilton Touches Down at Monse After Party