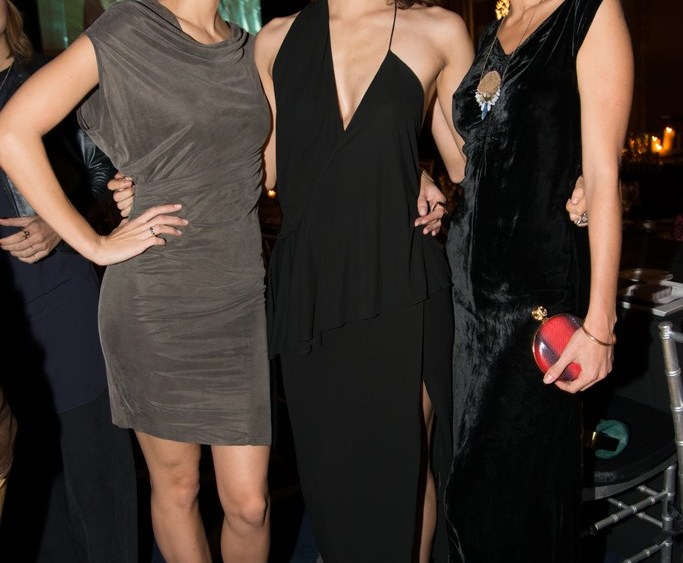 The stage was set as soon as guests — most of the downtown hipster set, and those hoping to join its ranks — trickled into the W Union Square’s grand ballroom Thursday night for a dinner celebrating Reece Hudson’s latest fashion film installation.

Perhaps it was the warm glow of the innumerable votives scattered across the black linen-cloaked tables, or the room itself, a Beaux Arts dead-ringer with sky-high ceilings and marble columns lining the perimeter. More likely than not, it was the still from the film — a shot of Carola Remer languidly leaning over a mirror, staring at her own visage — projected over the tables that drove the anticipation. The short, starring an assortment of models (Remer, Codie Young, Jamie Strachan) and actors (Rebecca Dayan and Brady Corbet), centers on a particularly alluring game of strip poker.

“It’s definitely about the buildup,” said Jenna Elizabeth, who directed the film, before taking her seat at the BlackBook-hosted dinner. “There’s a lot of sexually explicit activity.…But we were fair with the nudity. As a female director, I was like, ‘We’re getting the boys naked in this.’ ”

Though the cast jettisons shoes, belts and eventually shirts, they hang on to the clutches and minaudières from the accessory label’s spring 2013 collection.

“Isn’t it gorgeous?” Dayan said of the cherry-red hand-painted dégradé snakeskin minaudière, she toted for the evening. “I can’t fit my phone in it, but it’s still awesome.”

Moviegoers included Natalie Joos, Leandra Medine, Charlotte Ronson, Jen Brill and Timo Weiland. The feast was family-style, catered fare from Olive’s (Todd English’s restaurant downstairs). Guests passed bowls of butternut squash tortelli, gnocchi in tomato ragu and arugula salad to one another. Dayan chatted with seatmate, and rumored beau, Sam Hayes while Remer helped herself to the trio of tapenades on the table.

“Okay, let’s go announce this thing,” Elizabeth said before slipping away from her seat to give the film a proper introduction.

“We’ve all been there,” she told the crowd, speaking to the film’s tone. “In situations where the party has gone too far and you kind of think, How did I get here?”