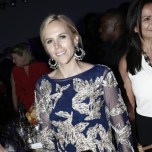 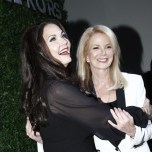 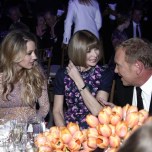 On Thursday, Instagram was inundated with more selfies than usual. But save the eye-roll — it was for a good cause.

In honor of World Food Day, Michael Kors pledged to donate 100 meals to children in need for each person who posted, on any social media platform, a photograph wearing his branded Watch Hunger Stop T-shirt along with the hashtag #WatchHungerStop. It was, as Kors called it, a “Selfless Selfie,” and there are more than 16,000 posts and counting.

“I did so many trunk shows for so long that I pride myself on knowing how people think,” Kors said of the campaign’s inception. “If you can have people feeling engaged and having a good time, suddenly people give back. It’s win-win.”

A frenzy of flashbulbs greeted the night’s most expected appearance, the debut of Blake Lively’s baby bump. For the big reveal, the actress chose a nude Michael Kors gown with iridescent floral embroidery. Why? “It zipped,” she said.

Midler kicked off the awards presentation with a zinger. “Can you believe God’s Love We Deliver is in its 29th year?” she said. “It’s almost too old to date Johnny Depp.” Ba-da-bump. The jokes continued when Kors presented an award to Wintour. “I don’t know if everyone here is a fan of ‘I Love Lucy,’ but if you love the episode with Lucy and Ethel at the chocolate factory, you haven’t lived until you’ve seen Michael Kors and Anna Wintour in the God’s Love kitchen,” he said. “For the record, Michael, I was thinking more Beyoncé and Jay Z than Lucy and Ethel,” Wintour shot back. Berry, star of CBS’s “Extant,” presented the lifetime achievement award to Moonves, the network’s boss.

After a tribute to the late Joan Rivers, a past honoree and board member of God’s Love, an auction got going. The first package, a walk-on role on CBS’s “The Good Wife,” was bounced around the room before ultimately going to Vera Wang. “Vera has bid $18,000 and is bitching about it,” auctioneer Jamie Niven said. By the time the main course of short ribs was plated, the gala had raised more than $3.9 million — an all-time high for the charity. “It makes me know that next year we just need to be bigger,” Kors said.