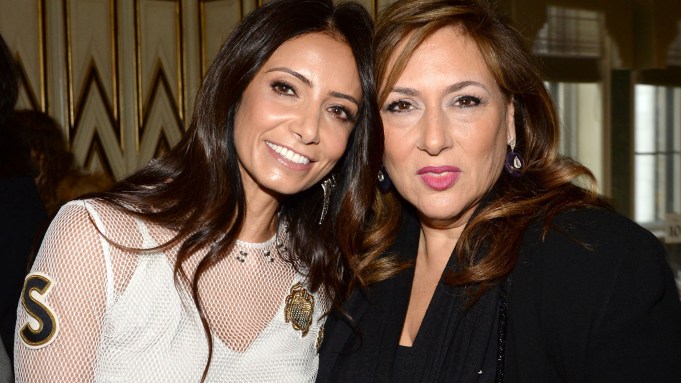 “It’s the same when you’re growing up and you dress up your dolls,” Blake Lively said, mildly distracted, on Tuesday afternoon. The actress was fussing with her sister’s shirt collar, not perfectly so, when her self-awareness hit. “Look at me, I’m fixing my sister while we’re talking,” she blushed.

It was a fittingly maternal gesture as the actress was co-hosting a luncheon to celebrate SemSem, a line of luxury clothing aimed at giving mothers the option to coordinate with their offspring without looking matchy-matchy (read: cheesy-cheesy). The brand was being toasted with a luncheon that Lively was co-hosting with friend and go-to jeweler Lorraine Schwartz (she designed the actress’ engagement ring) at Bergdorf Goodman’s BG restaurant. Before sitting down to a plate of tuna tartare, the actress waxed on about the pitfalls of mommy-and-me dressing.

“What’s interesting about SemSem is you don’t get that very literal ‘mommy-and-me look,’ like if you were walking down the street wearing the collection, it wouldn’t look like ‘Oh God, what are those people doing?’ That’s embarrassing!’” Lively said. “Instead they echo similar fabric or beading so you can actually match without, well, matching.”

“It’s such a bond between a mother and her daughter,” Schwartz said, draping her arm around Lively. “It is like she’s part of her mom’s wardrobe.”

Lively, a new mom to daughter James, shared this sentiment. “Growing up I know I wanted to wear my mom’s clothes, so it’s a neat way to feel like you get to share that,” she said. “My mom had this terrible T-shirt with a teddy bear on it that was gold and glittery, and I still have it. I wear it now with my baby.”

SemSem is named for Otaiba’s three year-old daughter, Samia, who is nicknamed, SemSem. Otaiba, who is married to the Ambassador of the United Arab Emirates to the United States, Yousef Al Otaiba, was motivated to develop the line after the birth of her daughter, when she noticed how her five year-old son could dress like to his father but she was without a similar mini-me option. “I noticed a void in the marketplace, and I’m an engineer by trade so I was problem solving – let me start my own line!” she said.

Lively, Schwartz and Otaiba were joined by editors and guests including Denise Rich and one Kris Jenner, who started her NYFW appearances early with her offsprings’ clothing launch Monday night. Perhaps she was there to nab some grandmother-granddaughter looks for North.