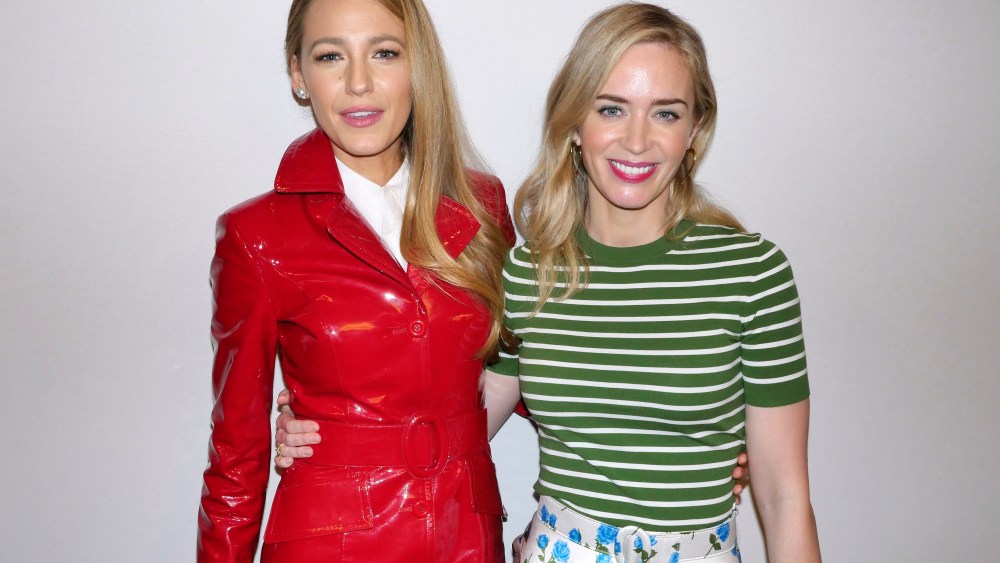 Michael Kors kicked off New York Fashion Week’s final day with a trip to Lincoln Center on Wednesday. Presenting his fall 2018 collection, which the designer dubbed “a Valentine to personal style” in his Playbill-inspired program, Kors filled the front row with a noteworthy lineup that included Emily Blunt, Blake Lively and Zendaya.

The “Spider-Man: Homecoming” actress marveled at the venue: an airy, multitiered lobby within the Vivian Beaumont Theater. “It’s so beautiful in here,” exclaimed Zendaya, who attended with her stylist, Law Roach. Having been in show business for years, she admitted she “never [gets] overwhelmed” with events like fashion shows, despite moments of chaos. “It’s been my life since I was 13. [The only thing bothering me] is this bright sun,” she added of the light pouring through the windows. “I’m just getting a little hot in this coat, but it’s worth it. I love Michael.”

There was lots of love for the designer throughout the room with Lively — wearing a red patent leather trench coat with heart-trimmed stilettos by Christian Louboutin — chiming in, “Michael Kors is my entire fashion week — I come out only to see him.” La La Anthony, who was out late the night before for the “Black Panther” premiere, was hesitant in admitting relief over fashion week’s final day in New York.

“I don’t want to say that [I’m excited] — I’ll never get invited to another fashion show again,” she said with a laugh. “It’s been a great week, but I’m to the point where I’m ready for something else.” The 38-year-old “Power” actress, who has an eponymous clothing line at Lord & Taylor, said the biggest lesson she’s learned from working in fashion is to listen to the needs of her customers.

“You have to take all women and all sizes into consideration,” she continued. Gazing around at the multitude of stairs that Kors’ models  were tasked with navigating, Anthony remarked, “This is intimidating. I’m going to say a quick prayer for them.”

Jourdan Dunn, Sofia Sanchez de Betak, Harley Viera-Newton, and Princess Olympia of Greece and Maya Hawke filled another portion of the front row. Hawke, the 19-year-old daughter of Uma Thurman and Ethan Hawke, was toasting the first fashion week during which she’s attended multiple shows. “It’s been great, but overwhelming. I love seeing when designers use their platform to really say something and experiment,” said the budding actress.

As models Ashley Graham, Adwoa Aboah, Bella Hadid and others paraded by, Theodora Richards drew attention as she spiritedly sang along to the show’s soundtrack by Michel Gaubert.  The Parisian sound designer’s mix included Elton John’s “Don’t Go Breaking My Heart” blended with Jay-Z’s “Empire State of Mind,” a bit of Simon and Garfunkel and Vince Guaraldi and wrapped up with Julie Andrews’ “My Favorite Things.”

“How could you not sing along with every word?” asked the 32-year-old daughter of Keith Richards. “All of those songs were hits. Michael choosing this venue just kills me. What a beautiful way to wake up on a Wednesday morning.”