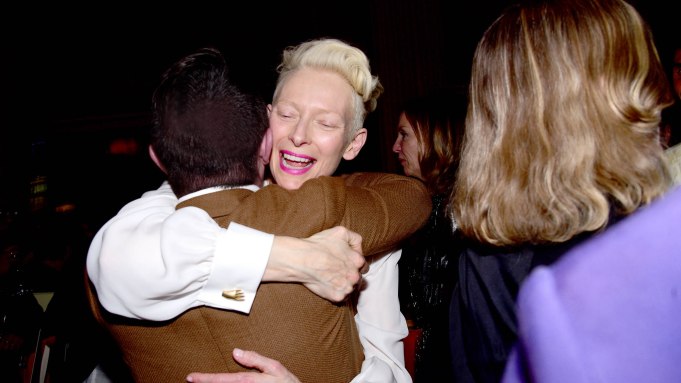 Bong Joon Ho can sure draw a crowd.

On Thursday night, the acclaimed South Korean director brought his latest film, “Okja,” to New York along with a procession of the movie’s stars — Tilda Swinton, Paul Dano, Steven Yeun, Lily Collins — and even executive producer Brad Pitt made an appearance, as did fellow director Noah Baumbach.

The Netflix film premiered last month during the Cannes Film Festival, where its placement in the Palme d’Or competition alongside movies that will be released in the traditional theater model became a topic of controversy. Many major South Korean theaters are boycotting screening the film because of its simultaneous streaming release.

“I thought some of that [conversation] was a little silly, because I’d rather have a Bong film than not, and this was the way to make it,” said Dano, who attended the premiere with girlfriend Zoe Kazan.

“Okja” takes on another controversial topic as its subject matter — the meat industry. The titular star of the film is a giant CGI superpig, which is taken from a young girl’s South Korean mountain abode — by a zoologist Jake Gyllenhaal — and brought to New York, where Mirando Corporation chief executive officer Lucy Mirando plans to make it the company mascot and also turn it into extra-tasty pork products. At its core, the film is a love story — between a girl and her pig — but also a commentary on corporations.

The statuesque Swinton, who also helped produce the film, portrays both Lucy and her more corporate-sinister twin, Nancy. “They are the kind of twins who have gone out of their way to be as different as possible from each other,” said Swinton, herself a mother to twins. “In fact, Nancy is sort of like their father, who’s a proper old school monster. Lucy’s a different kind of monster, she’s trying so hard to be all woke and eco-friendly and switched on and groovy and loved — she’s desperate to be loved,” she continued. “But she ends up messing up just as royally as she would have done if she hadn’t made the effort, because she’s still attached to making a lot of money.”

More Coverage From WWD.com:
Patrick Gibson is Becoming a Hot Commodity
Sam Riley Takes a Shot in “Free Fire”
Freida Pinto Takes a Stance in “Guerrilla”
Sienna Miller on Motherhood, Being ‘Shy and Weird,’ and Taking on Tennessee Williams