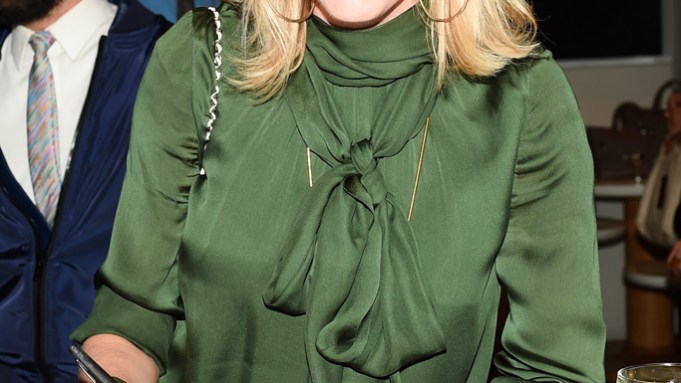 On Wednesday night, the Edition hotel in New York was crawling with gossip columnists. Specifically, it was brimming with the kind of columnists who ply their trade, or did, in The New York Post’s Page Six. But this time, the gloves weren’t off.

They had turned out for one of their own, Stephanie Smith, who’s written her first book, a story of love and cooking much like Nora Ephron’s “Heartburn,” except instead of dishes from “Mastering the Art of French Cooking,” Smith has specialized in sandwiches.

About three years ago, Smith’s boyfriend gave her a challenge: “Honey, you are 300 sandwiches away from an engagement ring,” she recalled. And off she went, cataloguing her experience on a blog that led to a deal with Dave Zinczenko’s publishing outfit for “300 Sandwiches,” and her upcoming nuptials.

“It was hard dealing with a full-time job, my father was very ill and trying to make 300 sandwiches,” Smith continued, but last May the boyfriend proposed. And yes, they ate sandwiches the next day.

It seems to be the season of book parties for current (and former) newspaper writers. Kate Betts, a WWD alum, toasted hers, “My Paris Dream,” which follows her early days in WWD’s and W’s Paris bureau, last week at Ladurée with Estée Lauder’s John Demsey and Cornelia Guest. And on Tuesday, Jo Piazza, a former gossip reporter for the New York Daily News, was holding court at Mulberry in SoHo for the book she’s cowritten with Lucy Sykes, sister of Plum, and a former fashion editor at Marie Claire.

Their chick-lit novel concerns a British editor of a women’s magazine — ahem — who finds herself in a battle with an Eve Harrington-type gunning for her job. Along the way WWD also makes an appearance in the form of a fictionalized reporter named Addison Cao, who is known for “his ample midsection,” they write, and his “preference for young Asian men.”

“It’s a conglomeration of a lot of different gossip columnists,” Piazza clarified later at a dinner at Da Silvano. The Post’s Johnson was also there; George Rush, formerly of “Rush & Molloy” at the News, had only made it to the store party.

After working on the book for a year, Piazza and Sykes have plans for follow-ups; the proposal for the next one is almost finished. But, does she miss the gossip beat?

“Not even a little bit,” she said. “I will say, though, being a gossip columnist taught us to be amazing reporters. It’s the best breeding ground to be a good journalist and a good storyteller at the same time.”