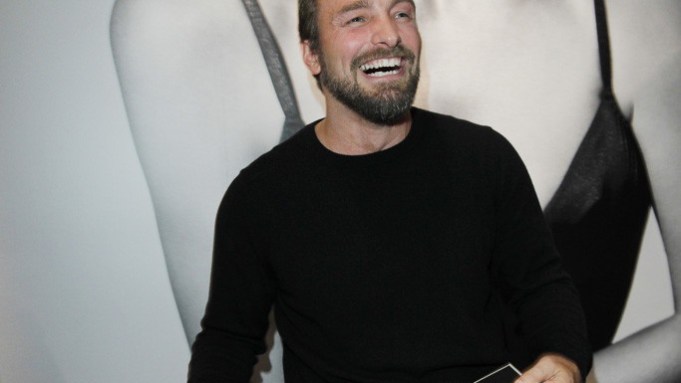 Photographer Brian Bowen Smith found himself in front of the camera when he hit Marc Jacobs’ Bookmarc in Los Angeles on Friday night to celebrate the release of his latest coffee-table book, “Projects.” “I thought this was a book signing?” quipped one guest, as an admirer asked Emmy Rossum to autograph a CD. The actress and singer — who cohosted the event and is featured in the book— obliged, having earlier tweeted out the party’s location. This might have explained the packed scene, but Bowen Smith had his fair share of fans as books flew off the shelves.

“He’s a fun collaborator, and he’s become a friend over the years,” said Rossum.

“He always sees through his lens with a fresh eye,” added Selma Blair, who first met Bowen Smith while dating ex-boyfriend Jason Schwartzman, then the drummer for Phantom Planet. “Brian was the photographer. We were in New Orleans and Austin — traveling around on the tour bus and getting crazy. Ah, the younger years,” she said before spotting a member of the wait staff in a Marc Jacobs shirt emblazoned with her image. “I have to get one of those T-shirts.” (Guests were later gifted with it.)

As Bowen Smith signed away, Marc Jacobs president Robert Duffy stood nearby holding his 20-month-old daughter, Victoria, and watching Bowen Smith’s young son Jona. “His son is my godson. Brian is family — and he’s helped us raise millions of dollars for cancer research,” he said, referencing the charity shirts and ads Bowen Smith has shot for the brand. “You can call on him to do anything.”

“I told you I know Cindy Crawford,” Bowen Smith shouted to a friend across the room. The model, who graces the book’s cover, and her husband Rande Gerber held court by the photographer’s side as he introduced them to his friends. Crawford seemed honored to be the main attraction: “It’s sweet. I don’t get as many covers these days, so it’s really nice that Brian put me on there. He loves his job and he’s passionate about it. That translates.”

“It’s been a long time since I’ve seen some of these faces,” reflected Bowen Smith. “This is like a surprise birthday party.” As if on cue, a giant cake was presented and the crowd burst into a round of “Happy Birthday,” while Bowen Smith — whose actual birthday is on Thursday — stood on his chair, soaking it all in. “I didn’t believe in this lifetime I’d be in this moment.…So give back and get drunk.”