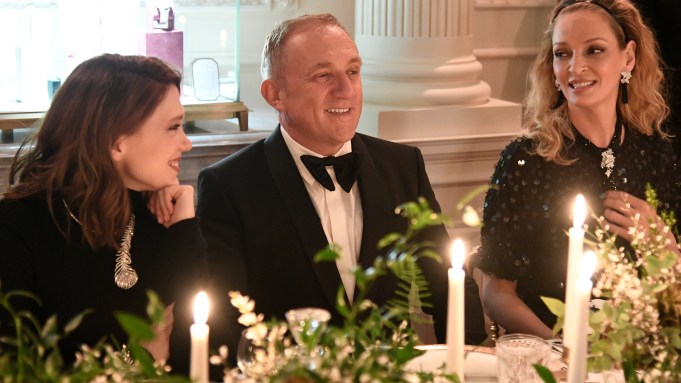 A HOME FOR THE HOLIDAYS: The Place Vendôme sprang to life for the celebration of Boucheron’s refurbished flagship. As if the Christmas holiday season had spilled into January, more than a thousand flickering imitation candles lined the storied square, forming the shape of an emerald cut — a house signature. And subtle enough to prompt playful speculation that other jewelry houses hosting events the same night might be able to pass off the installation as their own.

Dark town cars rolled past the spiraling column before pausing to deliver guests, who included Zhou Dongyu, Catherine Deneuve and Uma Thurman. They gradually filled the mansion’s airy rooms, which were packed to the gills by the time everyone ushered upstairs for dinner — spurred on by a parade of attendants ringing bells.

Fanny Ardant was in a playful mood.

“I dream of carrying out the biggest hold-up here — that’s why I am here,” she said, as she made her way with Léa Seydoux through the thick crowd that had gathered on a balcony overlooking the winter garden.

The pair just left their leather-seated perch in the cozy alcove-like room where the watches are displayed — engrossed in conversation, while Gong Li stood for the photographers in front of an arched window facing the square.

Sedoux, who has just finished two films — playing a criminal in one and a prison guard in the other — recalled recently buying herself a ring, noting jewelry purchases don’t have to be linked to male power but also female power. “I love all kinds of jewelry — as long as it shines,” she said, speaking in front of cases displaying the house’s Fleurs Éternelles collection.

Uma Thurman, who towered above the crowd, surveyed the carved walnut panels towering above her. The actress recently finished filming the first season of “Chambers,” a supernatural-themed series that will be released on Netflix in April or May. Thurman flew in from New York for the event, and to catch some fashion as well.

Upstairs, tables were dressed with fine French settings; subtly mismatched to convey the idea of being in a home. Framed photos lined up family style, showed movie stars in their younger years, wearing jewelry from the house, including Gwyneth Paltrow and Jodie Foster.

Salma Hayek and her husband, Kering chief executive officer François-Henri Pinault were also on hand for the evening along with Boucheron ceo Hélène Poulit-Duquesne, who sat across from Laetitia Casta.