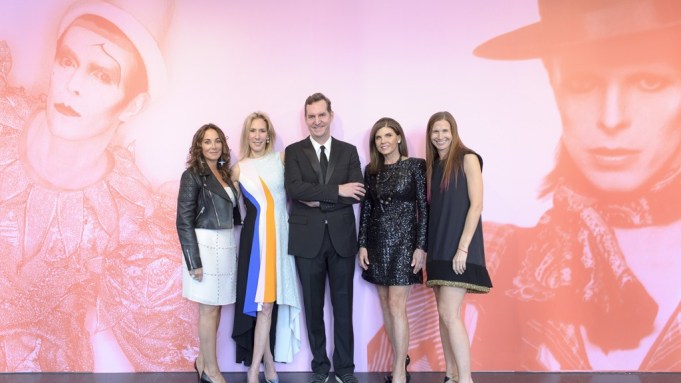 CHICAGO—The Museum of Contemporary Art turned to the glamorous Seventies to welcome the arrival of the “David Bowie Is” exhibit at its fundraising gala Saturday evening. Presented by Louis Vuitton, the party setting was designed to resemble Studio 54—of which glam rocker Bowie was a regular, and included sparkly disco balls, shirtless bartenders bedazzled with glitter, a dinner menu inspired by Mr. Chow and a performance by Bryan Ferry.

More than 750 people attended the gala and the evening raised more than $2.85 million for the museum’s future endeavors. The diverse audience, ranging from city officials and businessmen to drag queens, spoke to Bowie’s widespread appeal.

Guests included Mayor Rahm Emanuel (who declared today, the opening day of the exhibit, David Bowie Day in Chicago), and Chicago First Lady Amy Rule, artists Theaster Gates, Rashid Johnson and Tom Sachs, Barneys New York owner Richard Perry and his wife Lisa, former White House party planner Desiree Rogers and performance artist Nick Cave. A fashion professor at the School of the Art Institute of Chicago, Cave said he couldn’t wait to bring his students to the exhibit, which makes its only US stop here. “David Bowie was coming up at the same time as George Clinton and Elton John,” said Cave, who just opened two exhibits at Jack Shainman Gallery in New York City. “They’re like these pioneers who crossed the lines between fashion, theater and performance art—and that’s up my alley.”