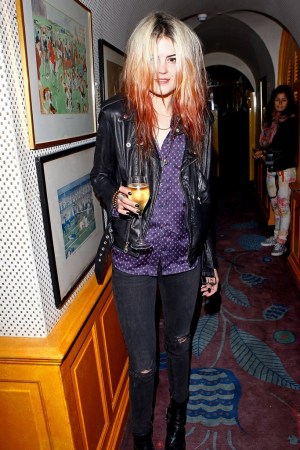 BOYS’ NIGHT: Boy George commanded the microphone and performed an acoustic version of “Karma Chameleon” at Annabel’s Saturday night at a party in honor of Rag & Bone, which opened its first London store over the summer and held a runway presentation this week to mark its arrival. “I broke a bottle of Champagne on the door with Anna Wintour — that was a bit of a highlight,” said Marcus Wainwright, who founded the label with David Neville.

Guests at the dinner, which was hosted by Jefferson Hack and Another Magazine, included Poppy Delevingne, Arizona Muse, James Cook and Alison Mosshart, who talked about her expat life in London. “I love America but I hate Florida. It’s hot and muggy, there are poisonous animals everywhere and old people driving Cadillacs. I spent my life trying to get out and I finally did it; I’ve been here for 13 years,” she said. As the evening wore on, Thom Yorke of Radiohead took over the decks and mixed a very enthusiastic set for the rave-ready crowd.

This story first appeared in the September 18, 2012 issue of WWD. Subscribe Today.
You're missing something!
SUBSCRIBE NOW