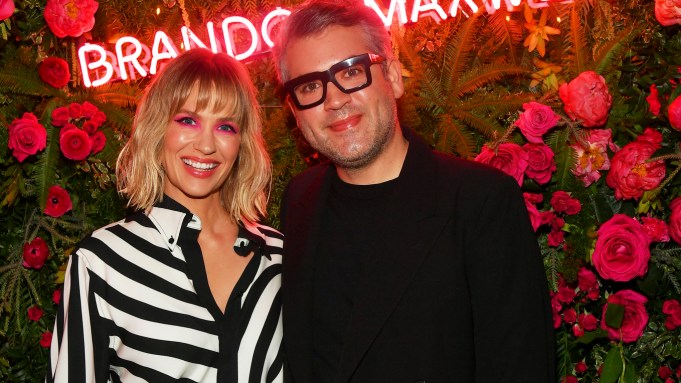 Brandon Maxwell is on a Los Angeles tour this week — taping “The Ellen Degeneres Show”; hosting a friends and family cocktail party at Voutsa, the interior design studio that made prints for his resort 2022 collection, and shooting his first campaign as creative director for Walmart.

And on Tuesday night, he was the guest of honor at a dinner Saks Fifth Avenue hosted for him at Mr. Chow, with 40 guests dining underneath silver streamers that gave a nod to the silver fringe in his glam resort collection.

“Six years ago, I launched my collection at Mr. Chow in New York…and my life has changed so much in that time. But the world has been really weird in the last couple of years and I feel like a lot of my priorities have changed, but what’s not changed is my love of what I do,” said Maxwell, giving props to Saks for buying his first collection, and being with him since the beginning. “To have a space that supports you while you go through finding who you are is such a blessing and Saks has done that for me.”

The crowd was a mix of fashion people, influencers and members of the L.A. social set, many dressed in Maxwell’s decorative clothes.

“This is my first time out,” Maxwell said of coming out of COVID-19 isolation to socialize. He was meeting some of his L.A. friends for the first time IRL, including January Jones, who he had only interacted with on Instagram. “It’s so nice for people to show up,” he said.

But everyone was happy to support Maxwell, who has been on TV as a judge on “Project Runway” since 2019.

“He’s a great guy, very talented, and his clothes are beautiful,” said Angelique Soave, one of the evening’s hosts, wearing the designer’s fierce silver croc bustier dress, and sitting next to Katherine Ross Govan, still on a high from her husband’s LACMA Art + Film Gala on Saturday.

“Every single person at my table is talking about how great that dress is on you,” Saks’ star personal shopper Tony Ferreira said over Soave’s shoulder, noting that the Beverly Hills store has been busy since L.A.’s COVID-19 numbers have gone down. “And I’ve only got two of them.”