The designer had much to celebrate at the Four Seasons. 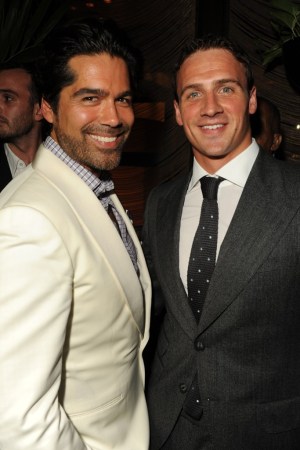 JEAH, RIGHT?: Brian Atwood toasted his soon-to-open boutique at 655 Madison Avenue, a new Web site and his new ad campaign at the Four Seasons in New York on Wednesday night. A disco ball, a plaque emblazoned with neon purple “Sex Is in the Heel,” lights and a wall of screens with the designer’s salacious short film on a continuous loop welcomed guests such as star of the campaign and supermodel Candice Swanepoel, Heidi Klum, Kim Kardashian, Rachel Roy, Rachel Zoe, Iman, Michelle Trachtenberg, Nate Berkus and Gabrielle Union. Olympic swimmer Ryan Lochte also made his New York Fashion Week party debut at the splashy, buffet-style dinner hosted by DeLeón Tequila after seeing Serena Williams advance to the semifinals in U.S. Open and attending Joseph Abboud’s presentation earlier in the day. “I’m wearing Joseph Abboud head to toe, except my boxers,” Lochte said, revealing that even though he’s become known for his famously-banned grill and Swarovski emblazoned sneakers, his favorite accessory is a custom-made Breitling watch. He clarified that this is actually his second fashion week (he went to several shows a few years back), but this year he will be a correspondent for the E network and interview Anna Wintour. “I’m kind of nervous, but I’ve met her before. I’m going to ask her how she came up with the idea of Fashion’s Night Out.”