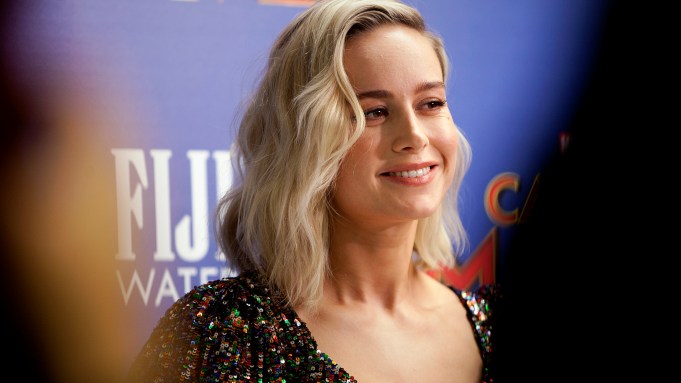 Arriving at the New York screening for her new film, “Captain Marvel,” in a sequined Rodarte two-piece outfit, Brie Larson talked about how her titular character’s superhero uniform has made its own impact during her press tour, where scores of young girls have shown up to premieres wearing the red and blue suit.

“I cried,” the actress said on the first time she saw girls dressing up like her character. “For me, I make these movies because I’m an introvert and I was home-schooled. I always felt that the things I was feeling, only I was feeling them, so I started making movies as a way to express those things and they’re like messages in a bottle. These press moments, weirdly, they’re the only time I’m around people who see what I do. That’s the only time I get to be like, ‘oh, you feel the same way I do.’”

Hosted by The Cinema Society at the Henry R. Luce Auditorium on Wednesday night, the film’s screening brought together the likes of Debra Messing, Zachary Quinto, Padma Lakshmi and Morena Baccarin, among others.

“Captain Marvel” is the 21st film in the Marvel Studios franchise and first to feature a female-led superhero. Set in the Nineties, the film serves as a prequel to the present-day events in the Marvel Cinematic Universe and follows the origin story of Captain Marvel, who many have speculated will come to the rescue in the upcoming “Avengers: Endgame” film, the last of four “Avengers” films, slated for release next month.

Larson herself has used her red-carpet looks as a way to pay homage to her titular character. For the film’s world premiere in London last week, Larson wore a custom blue and gold Valentino gown and then wore a custom Rodarte star-studded dress at the film’s Los Angeles premiere, both giving a nod to Captain Marvel’s uniform.

“It’s just been different ways of owning my body,” Larson said on her fashion inspiration for the film’s press tour. “That’s been the theme of this whole press tour and understanding that it changes from day to day, what feels empowering to me and what makes me feel good is going to be different. Sometimes it’s something flowy and feminine and sometimes it’s really hard and tough.”

Larson was joined at the screening by costar Annette Bening, who also talked about the film’s impact prior to the screening.

“It’s good that people can imagine girls and women taking over and basically being in charge, which is a new thing in the movies,” she said. “[Captain Marvel] is very cool, she’s funny, she’s smart and she’s not overly serious, but then she becomes, you know, the bomb, so it’s very cool.”

Brie Larson Had the Most Fun at Fashion Week