Marc Jacobs, Miuccia Prada and Kate Moss were among attendees. 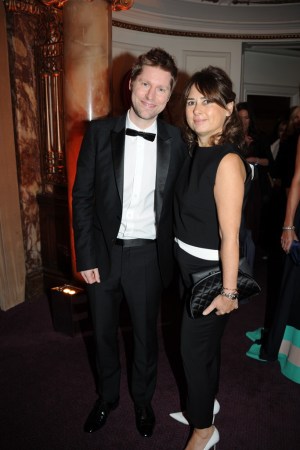 “Look at that no-nonsense strut,” Osman Yousefzada commented as Miuccia Prada took the stage. Prada, decked out in a sober top and skirt and a delicate feather headdress, was collecting the inaugural award for International Designer of the Year at the British Fashion Awards on Monday night in London.

“They’re Prada feathers,” Prada said of the multicolored plumes she wore like a hair band. “No one had the courage to wear them — except me,” added the designer, who made a flying visit to London to collect her prize.

Next to her was artist Francesco Vezzoli, who is currently under fire from Italian authorities for attempting to export bits of a deconsecrated Italian church for an art installation in New York. “I am a very relaxed and happy man,” said the artist, a longtime favorite of Prada’s, declining to be drawn further on the controversy.

Prada and Vezzoli weren’t the only Italians in town: Donatella Versace presented her former protégée Christopher Kane with the top award — Women’s Wear Designer of the Year — at the annual event, which this year was held at the London Coliseum with a crowd that included Gwyneth Paltrow, who presented an award; Marc Jacobs, who presented Kate Moss with a special prize for 25 years in the business; British First Lady Samantha Cameron; Rupert Everett; Christopher Raeburn; Jonathan Saunders; Stephen Jones; Sienna Miller, and Stella Tennant. The indie rock band Daughter performed. Guests were seated at cozy banquettes — like extras from “Cabaret” — and noshed on tapas and watched the awards as they drank wine, Champagne and tequila.

“Two-and-a-half decades ago, I was mesmerized by a portrait by Corinne Day of the most perfectly imperfect beautiful girl I have ever seen,” Jacobs said of Moss. “She defies convention, and is the rarest of jewels.”

Moss’ day began with an appearance at the Bookmarc store in London to promote a line of T-shirts designed by Jacobs to mark the 60th anniversary of Playboy magazine. In the evening, after the awards, Moss and Jacobs continued the Playboy narrative at the magazine’s anniversary party at the Playboy Club in London. While Hugh Hefner was not in attendance, his son Cooper Hefner was in the mix of bunnies and fashion types, who included Prada, Versace, Miller, Rita Ora, Kane and Henry Holland.

“I came for Kate of course,” said Versace, who was guided by Moss through the crowd while stopping to greet guests along the way.