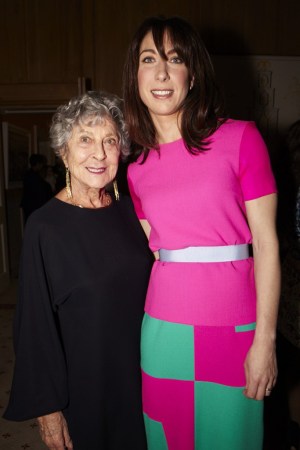 CELEBRATORY MOOD: “I stayed in town for this, and Downing Street didn’t let me down,” said Stephen Webster, who saw the inside of Number 10 Downing Street for the very first time on Tuesday night. The jeweler was at the twice-yearly cocktail party hosted by Britain’s First Lady Samantha Cameron and the British Fashion Council at the Prime Minister’s official home and headquarters.

Webster had postponed his trip to Los Angeles by a day. Tonight he’ll be hosting a party at his Rodeo Drive boutique to mark the opening of a show of British photographer Richard Young’s photographs of Elizabeth Taylor.

“We’re expecting so many people — Tiffany is going to be so angry,” said Webster, referring to his Rodeo Drive neighbor. Young’s son Sam Young will be DJing at the event.

“I don’t like having my photo taken,” said Burstein, who was dressed in Lanvin and wearing jewelry by her granddaughter Natasha Collis. She was referring to possible future photo shoot. “When I see photos, I see wrinkles. How is that possible?” she added.

Meanwhile, Wickstead was feeling the end-of-fashion-week fatigue. “We did orders all weekend,” said the designer, who also dresses Samantha Cameron. “I think it’s time for me to go home and make myself a plate of pasta.”