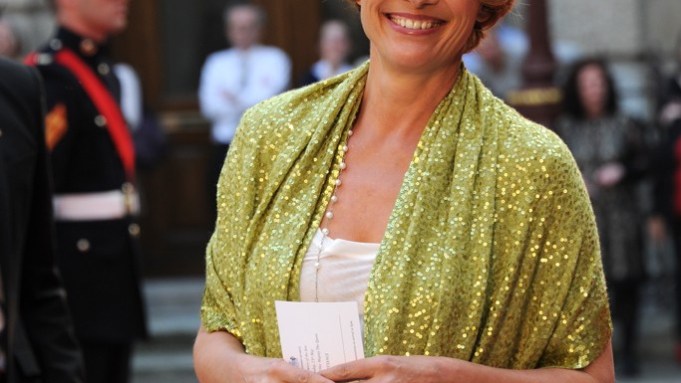 There is nothing like a dame, a pop star, a princess — or the Queen, for that matter — to make a London party hum. And that was just what happened on Wednesday night at the Royal Academy of Arts, where a constellation of British stars, including Dame Judi Dench, David Hockney, Sir Paul Smith, Sir Paul McCartney, Joan Collins, Emma Thompson and Jane Horrocks turned out to congratulate Queen Elizabeth II, and to celebrate her Diamond Jubilee.

Inside, performers including Jamie Cullum and the London Community Gospel Choir entertained the crowd, while Sam and Sam Clark and Yotam Ottolenghi were among the chefs who whipped up the canapés. Outside, a brass quintet played pieces including Handel’s “Water Music” and “Music for the Royal Fireworks” as guests including Rob Brydon, Amanda Wakeley, Sarah Burton, Richard E. Grant, Zandra Rhodes, Vivienne Westwood, Manolo Blahnik and Philip Treacy made their way through the cobbled courtyard into the Academy.

“It’s the kind of night that makes you proud to be British,” said Anya Hindmarch, who’s just finished installing her “Queen for a Day” Diamond Jubilee shop windows that feature lessons in how to wave and emergency paper tiaras.

“I haven’t looked at the art at all, I’ve been so dazzled by the people,” said David Walliams, who was recovering from a prolonged bear hug from an exuberant Shirley Bassey. “When do you even bump into Shirley Bassey? Not in the supermarket,” said the comedian, who plans to publish his autobiography in the autumn with Penguin Books.

Richard James was also reeling from his contact with the crowd. “There they were just standing together — Annie Lennox, Shirley Bassey, Petula Clark! I even met the Queen tonight — by accident. I found myself in the queue to greet her. Could this night be more British?” he said.

The guest list included members of the Royal Academies of Arts, Music, Dance and Dramatic Art, and read like a who’s who of highbrow and pop culture, with the Queen, of course, topping the list. Earlier in the evening, she presented a series of Jubilee Awards to aspiring creative arts and design students.

Williamson had quite a night: He posed for a picture on his iPhone with Joanna Lumley and met Her Majesty. “When I met the Queen I told her I was a fashion designer and she said: ‘It must be tough right now.’ I told her it wasn’t so bad,” he said.

Across the room, Hewson, who was wearing a black lace Dolce & Gabbana dress and chatting with husband Bono and Westwood, said Ryan McGinley would be shooting the Edun campaign for the second time. “It’s a nature theme again, but I can’t reveal much more,” she said.

Asked about the precipitous slide in Facebook shares, Hewson — whose husband recently made a tidy fortune on his multimillion-dollar stake in the firm — said: “Mark [Zuckerberg] is smart, and they’ll figure things out. We’re big fans of Facebook, and we believe it’s got a lot of long-term potential.”

“They’re great — they lengthen your stride — and they’re heavy. I’m not going to blow away in them,” she said of the sandals, which looked as if they came from the set of “The Flintstones.” On the other side of the Academy, Collins had just finished curtsying to the Queen. “She’s gracious and wonderful and I am a huge admirer,” she said. “I’ve already taped some TV interviews about her that will run next week before the Jubilee.”