By Ericka Franklin and Marcy Medina on November 1, 2015
View Slideshow 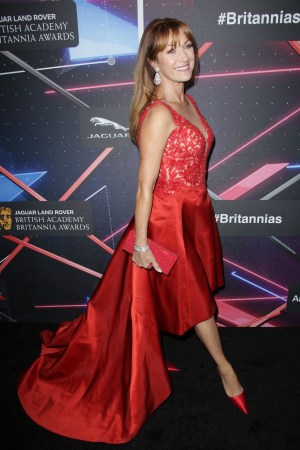 Meryl Streep was the woman of the hour Friday night at The Jaguar Land Rover British Academy Britannia Awards, which also honored Amy Schumer, Orlando Bloom, James Corden, Harrison Ford and Sam Mendes. While none of the recipients are strangers to prestigious awards, they seemed like amateurs compared to Streep, which prompted director Stephen Frears, who recently worked with the Academy Award winner on “Florence Foster Jenkins,” to joke, “I’m here to give an award to Meryl Streep, who hasn’t had an award for five to six hours.”

Since the Britannia’s inception in 1989, the Stanley Kubrick Award for Excellence in Film has seen all male recipients, making her the first woman to win. With her speech in hand, the pantsuit-clad actress deadpanned, “I’m really honored to receive this award and to join this distinguished list of men and women. Oh, I’m sorry. I’m honored to receive this award that has been given to the distinguished list of men and men. I wore the right dress, didn’t I?”

When Schumer took to the stage to accept her Excellence in Comedy award, she quipped, “I want to thank God, and by God I obviously mean Meryl Streep.”

Robert Downey, Jr., who presented Orlando Bloom with the Humanitarian award for his work with UNICEF, also took the opportunity to chide him about an alleged fist-swinging altercation. “Orlando Bloom is doing amazing work to improve the lives of children all over. He’s passionate, supertalented, yet totally down to earth when he’s not swinging on Justin Bieber or hooking up with Kendall Jenner.”

“I wanted the opportunity to clear this up,” Bloom said afterward. “I actually did not connect with Justin Bieber and I don’t know Kendall Jenner either. But if anyone’s got her number, I’d love it,” he said with a smile.

“It would be a little ridiculous if I were nervous about the Britannias when I do an hour of live television every night,” said Corden, who called the affair “a nice, relaxing party.”

“I mean, it’s just another Thursday night in L.A., right?” said Collins of getting gussied up for the penthouse party.