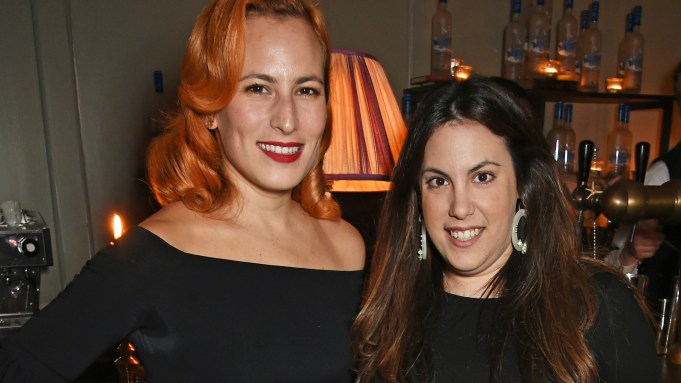 FEELING LUCKY: Designers and fashion figures gathered at the new Soho House on Dean Street in London for a dinner designed to be an icebreaker — and get everyone in a party mood — ahead of the British Fashion Awards that take place on Monday.

Ice was certainly the appropriate metaphor for the evening, as temperatures over the weekend dropped dramatically and icy blasts blew through town. “It even snowed — for five minutes — this morning,” said Emilia Wickstead, who said she was up early with her two young children watching the flakes flutter down.

Children were a hot topic on Saturday night. “I’ve just managed to get my kids to bed and now I’m going to get myself a drink,” said Charlotte Olympia Dellal, who was wearing a lacy black Alessandra Rich dress.

While the snowflakes did not return, the weather persisted, although it didn’t dampen anyone’s dress sense.

“It’s a tablecloth,” said Molly Goddard, pointing to her long white, doilylike skirt, a piece from her BA show at Central Saint Martins. “I’m surprised I still fit in it,” added the designer, who is up for the award in the Emerging Women’s Wear category.

Mary Katrantzou was dressed in black, and she plans to don the same color on Monday night at the awards ceremony. “Natalie [Massenet, chairman of the British Fashion Council] asked me to wear one of my own, but I’m going to stick with black and then Mary-fy it with jewelry or embroidery or something,” said the designer, a past BFA winner, who’s up for the New Establishment award this year.

She showed off her Mary-fication skills on Saturday night, carrying an m-shaped clutch from her Alphabet collection.

Guests including Thomas Tait, Sophia Webster, Christopher Suarez, Jeremy Langmead, Nadja Swarovski, David Gandy, Fernando Jorge and Daisy Lowe gathered at the party, where the vodka cocktails — and various others — flowed. DJs at the after party included Rita Ora and Nick Grimshaw. The evening was cohosted by Massenet and Swarovski.