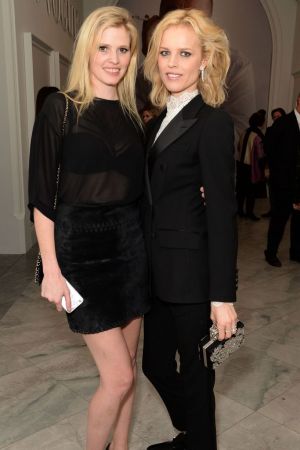 HISTORY IN THE MAKING: British Vogue fired off its centennial celebrations Tuesday night with a party to mark the opening of “Vogue 100: A Century of Style” at the National Portrait Gallery.

It took curator Robin Muir five years and 1,800 international issues of Vogue to create the final edit of more than 280 images that showcase the range of photography commissioned by British Vogue since it was founded in 1916.

This story first appeared in the February 11, 2016 issue of WWD. Subscribe Today.

The National Portrait Gallery show features famous fashion images from the pages of the magazine, as well as previously unseen prints from the Condé Nast archive.

The exhibition was designed by Patrick Kinmonth and covers a decade per room, with a huge image of Alexander McQueen at one end of a long hallway. All the great names in fashion photography are represented, from Cecil Beaton and Horst to Lee Miller and Norman Parkinson; Terence Donovan and Terry O’Neill to Nick Knight and Lord Snowdon.

There are so many fashion moments hanging on the walls, including the January 1990 cover of British Vogue featuring Naomi Campbell, Linda Evangelista, Tatjana Patitz, Christy Turlington and Cindy Crawford photographed by Peter Lindbergh; Corinne Day’s breakthrough shot of a teenage Kate Moss from 1993; Anne Gunning in Jaipur by Parkinson in 1956, and a 1941 wartime picture story shot by Beaton on London bombsites.

Alongside the models are some big-time names that have appeared in the title over the decades: Charlie Chaplin photographed in New York by Edward Steichen; Margaret Thatcher shot by David Bailey in 1985; Winona Ryder in a tutu by Herb Ritts in 1991; Princess Diana photographed by Patrick Demarchelier in 1990; David and Victoria Beckham asleep in a Manchester hotel corridor by Juergen Teller, and Beaton’s 1968 image of David Hockney, Peter Schlesinger and Maudie James.

There’s an intoxicating dose of fantasy in the mix, too, including Tim Walker’s images of Kirsi Pyrhönen sitting astride a yak in Mongolia from 2011, Helena Bonham-Carter amid the wreckage of a glass elevator in a field of sweet-peas and Knight’s image of Gemma Ward lost in a mirrored neon labyrinth.

British Vogue editor in chief Alexandra Shulman had strong feelings about too many of the images to single one out as a favorite, but there were a few that were particularly special to her. “Within the period that I have been editing, obviously it was exciting to have the whole Corinne Day shoot of Kate Moss that stirred up such controversy, and the wonderful Tim Walker prescient portrait of McQueen and the skull,” she said. “One of my favorites was Mario [Testino’s] portrait of Prince Charles and his chickens. That shoot was originally meant to take place on 9/11, but as that day unfolded clearly it wasn’t able to happen.”

“Four months — after my exams — it’s going to be a full-on assault,” she said.

Another model, Isabeli Fontana, attended with her fiancé, the NX Zero frontman Diego Ferrero. She was jet-lagged after taking a red-eye flight to London earlier in the day, but it did nothing to dampen the excitement about her upcoming marriage.

“I don’t know what I’m going to wear yet,” she told WWD. “I’m thinking maybe a few dresses. We’re going to do the civil ceremony first so we can sort out green cards and stuff because we’re moving to America, but then maybe a party in Brazil and Miami.”

Fontana was one of the few model guests who did not appear on the walls of the exhibition. “Actually, I have only shot for British Vogue one time,” she said. “But I hold the record for the most covers of Brazilian Vogue.” How many? “I don’t even know. A lot. It’s over 30.”

Karlie Kloss swung into the party as the ashes were cooling on the festivities.

“I’m so late, I haven’t even had a chance to see the exhibition,” she said. “I’m going to have to come back when I am here for London Fashion Week. I’m not walking in many shows but I am going to be here. I’ve never done the front row before,” she said. “I mean, maybe once at my high school runway show.”

Laura Bailey, in a masculine black Chanel suit, joked that she looked like a “Chanel boy” and admitted that she’ll be skipping the shows in London this season.

“I’m in so much trouble from everyone but it’s the school holidays and I’m going to be in the countryside with my kids,” she said. “And, you know, I’m a working girl, I want to focus on shooting and writing and sometimes you need a break.”

The exhibition, sponsored by Leon Max, runs Feb. 11 through May 22.