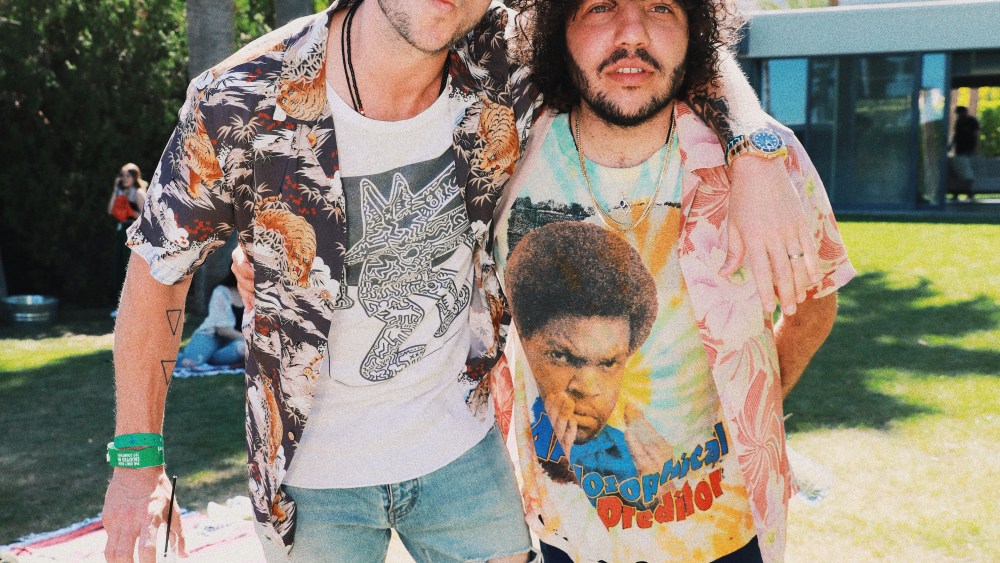 “They do it right every year and it’s always good seeing everyone together — it’s my favorite party to go to,” said Tedder, who performed the hit “Apologize” with Kygo during one of the festivals prime time slots. “For me, hearing the audience sing along to every word of that song was powerful,” he said, adding that as soon as he got off stage, Chance the Rapper told him “That’s my s–t, that’s my s–t,” which is a compliment in music parlance. “Seeing how the audience reacted was amazing,” said Interscope Records chairman and chief executive officer John Janick.

Of the Coachella fashion scene, Tedder offered, “It used to be like Burning Man lite, now the peacocking with the clothing has gone next-level and Coachella is the Instagram festival at the forefront of real-time culture.”

Up-and-coming Interscope artists Jaira Burns decided to combine party and business attire with her neon blue suit. “It’s about whatever style you decide to be yourself in,” she said.

Sorum shared that he’s been coming to Coachella for 10 years and has seen the resort town of Palm Springs shift into a “hub of creatives in art and music.” He even got married there and lives around the corner from DiCaprio. “My wife is my queen, but Beyoncé is my second queen,” he said.

Rock Mafia founder James observed, “It’s amazing to see the women this year own it. Female artists are having a great moment from SZA, Elohim, Kali Uchis, and Alison Wonderland, one of the best DJs in the world.”

Actress, model and fitness expert Brooke Burke, who fronts for Skechers, was experiencing her first Coachella thanks to her 18-year-old daughter and her four teenage friends. “Coachella is an interesting branding and marketing opportunity and launching pad,” she said, pointing out Interscope’s own wine, Electric Sky, and its stackable glass packaging. “I’m now all about stacking rosé all day,” she laughed.