Yune Ho, Kinfolk designers and the duo behind S.W. Basics of Brooklyn attended the party on Monday night. 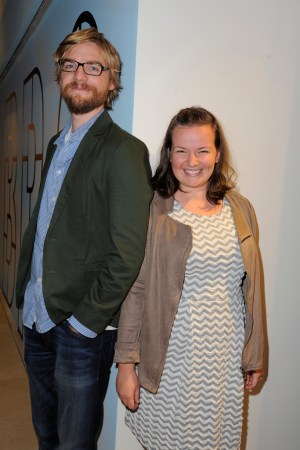 Guests nibbling lobster rolls and drinking Brooklyn Lager listened to tunes there by Brooklyn band Little Daylight and danced to a set by Polo and Pan. The duo had also shot the film “Brooklyn Amusement Park,” which was being screened on the first floor.

Greats is among the 100 Brooklyn brands in the storewide showcase devoted to the New York borough’s influence on everything from fashion to beauty to home decoration. It’s slated to run until Oct. 17.

Adina Grigore and Adam Poor, behind the latter beauty label, were staying in the Bastille neighborhood of Paris.

S.W. Basics of Brooklyn landed at Target in March.

“They’re expanding us next year,” he enthused, drinking Brooklyn Lager. “They brew this four blocks from our apartment. They are like celebrities in Brooklyn.”

Grigore said one day there might be a freestanding store for his beauty brand in Brooklyn or Paris.

“There are lots of bars, restaurants and shops. It feels very Brooklyn, although the architecture is so different. I wouldn’t dare to compare. But in terms of energy it’s very similar,” he said.

“Sure we cannot compare,” said Francis Kurkdjian, who was readying to unveil a mirror installation on the facade of Paris’ Grand Palais on Tuesday. “However, where I live in the 10th there are a lot of strollers, kids, hats and a brand new organic vegan store.”

“I go to Florence for the shows. I was in love with Florence, but I think Paris takes the cake,” he said.

“We are based in Williamsburg, right in the heart of it, in Ground Zero,” said Jessica Lynn Barensfeld cofounder of wool hat label Lynn & Lawrence. “In fact, Williamsburg has become a more international neighborhood than a Brooklyn neighborhood. We made a living with Airbnb during a year, there are so many French people there.”

Barensfeld was in town with her husband Simon Lawrence and their four-month-old.

“Last time we stayed in Hôtel Amour in Pigalle,” said Lawrence. “I used to do modeling for Ego rubber boots. I had the Brooklyn look so they offered to ship me over. I was like ‘OK!’ Now they can find the Brooklyn style everywhere.”

His child was playing with Timo, the five-month-old of jewelry designer Fay Andrada and her husband Ben Plimpton.

“We found out Brooklyn is very much a community. Once we meet with a designer, you’re being introduced to his friends,” said Bon Marché’s group style director Jennifer Cuvillier, who spent months with the buying team sourcing the crème de la crème of the borough’s labels.

“We decided the Left Bank is Paris’ Brooklyn — at least for the time of the exhibit,” she said with a laugh.