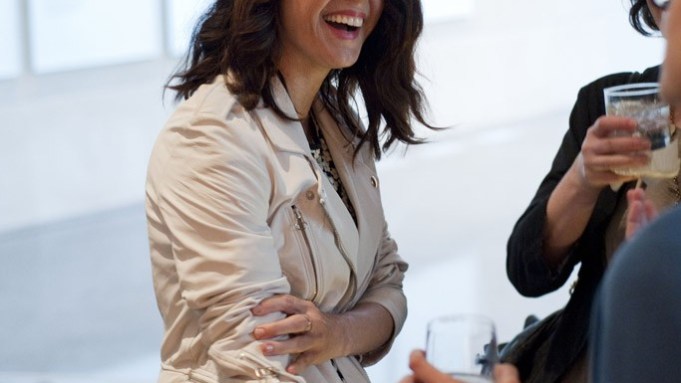 On Wednesday, at the Brooklyn Museum, Marisa Tomei wore her civic pride on her neck.

Just below the collar of her black and white embroidered Preen dress hung a silver chain with a midsize charm in the shape of the word “Brooklyn.” The actress, a proud daughter of the borough, was serving as honorary chair for the museum’s annual Brooklyn Artists Ball and was taking in the museum during cocktail hour.

“One of the honorees spoke so beautifully about her childhood here in Brooklyn and that there were so many free programs — they just happened to be free — they were fantastic: art for kids stuff and all kinds of crafts stuff, it wasn’t just fine art,” the actress said. “My mom brought me a lot to that kind of thing here, and the library too of course, because my mom’s a teacher… [which means] you get the extra intellectualism and all the government services. You know, the good stuff.”

A random sampling of art and social regulars, including Dustin Yellin, Gloria Steinem, Connie Chung and Judy Chicago turned out for the evening. After remarks by museum director Arnold Lehman and donor Elizabeth Sackler, one of the event’s honorees, who announced an endowment for a curator for the museum’s Elizabeth A. Sackler Center for Feminist Art, guests headed upstairs for dinner in the museum’s Beaux Arts court. The place settings at each of the 40-foot dinner tables had each been conceived by one of 16 Brooklyn-based women artists, including Swoon, Malia Jensen, Simone Leigh and Chitra Ganesh. The table designed by the artist Liz Magic Laser, which featured performers who dispensed mead in cattle horns, proved especially popular.