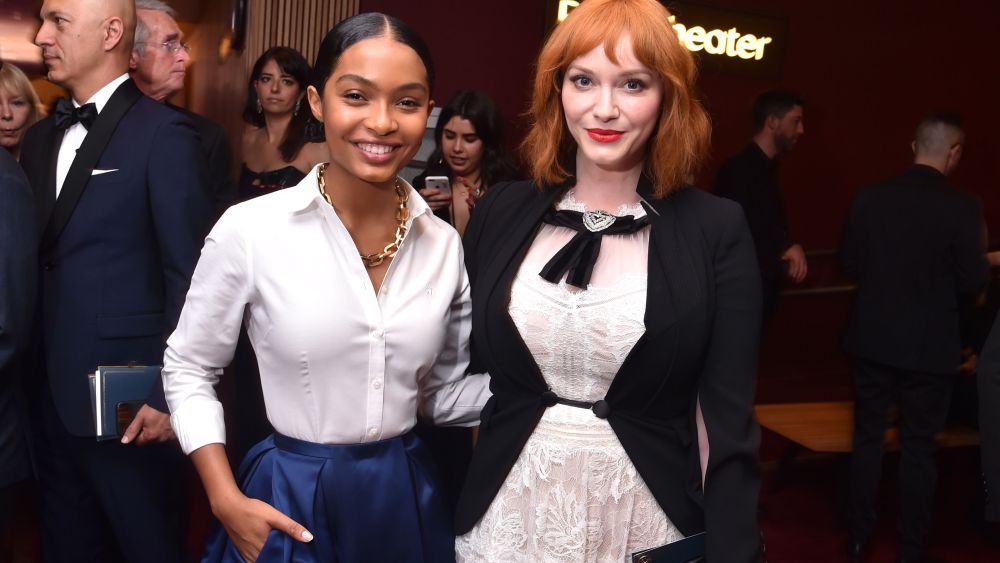 “I feel like I’ve only lived in a world of Brooks Brothers,” said Christina Hendricks, making her way up to Jazz at Lincoln Center with husband Geoffrey Arend on Thursday night, where the brand was celebrating its 200-year anniversary. “But I think the first time I became super familiar with them was when they started doing suits for ‘Mad Men,’ and that’s when I was much more aware of the tailoring and the details.”

“Just my first idea of what a gentleman looked like, was the Brooks Brothers look,” Arend said, adding that he acquired his first piece as a child. “I think I was like six years old when my parents bought me a blazer — the blue blazer and gold buttons. I was like, all I want to do is wear Brooks Brothers — and they were like, ‘Ha ha: OK. You can have a T-shirt.'”

Warren Elgort also started with the brand from a young age.

“There’s no way I can remember [the first time wearing the brand] because I was 4 years old, 3 years old, probably — as soon as I could put on a jacket and tie,” said Elgort. “I’ve worn Brooks Brothers my entire life. My dad takes me there right after Christmas so we can get a discount and get a lot of clothes,” the 28-year-old filmmaker continued, adding that he still wears a suit designed for the brand by Thom Browne that he got while in high school. “People say ‘you can’t keep wearing that suit,’ but it’s perfect, I love it, so why not?”

Upstairs, attendees at the birthday party filled the concert hall and were treated to a celebration of American music — everything from jazz and bluegrass to gospel and blues.

“I’ve never been to the building Jazz at Lincoln Center, I’ve been wanting to go,” said Pablo Schreiber. “I never got to go when I lived [in New York], so I’m very excited to just see the view, and listen to the music – I think the concert sounds amazing.”

Longtime Brooks Brothers partner Wynton Marsalis welcomed the group saying: “It’s not often you get to host a friend’s 200th birthday party.” The two organizations have had a relationship for two decades.

“We’ve been partnering with them for 20 years. This is a very logical place to come to celebrate,” said Brooks chief executive officer Claudio Del Vecchio. “Wynton’s been a very good friend, of me personally and the band, so it’s going to be a lot of fun tonight,” he added.

To celebrate that relationship, Marsalis presented  Del Vecchio with his own trumpet, saying: “You’re an honorary member of our orchestra so it’s only fitting that you should have a horn. We’re going to St. Louis next week to play with the symphony, so get ready.”

In typical low-key Del Vecchio fashion, he said the evening wasn’t about him, but about the incredible longevity of Brooks Brothers since Henry Sands Brooks first opened the doors to his shop on Catherine and Cherry Streets in lower Manhattan in 1818.

But the evening was really centered around the music. The concert featured a number of special guests — some of whom elicited gasps when they stepped out on stage, notably Paul Simon, who played an acoustic set. Other performers included Jon Batiste and the Dap-Kings, Mark O’Connor, Alison Krauss and Chris Thile.

Actors including Hendricks and Arend, “Chicago Med” star Colin Donnell and Katie Holmes, who hit the stage with Zac Posen, Brooks’ creative director of women’s and provided historical tidbits in between sets.

“It’s been a very festive year. We started in Florence with the show, and now we’re here, and we’re doing a show in Shanghai,” Posen said offstage. “I’m pretty honored to be working for such an old heritage company that’s lasted in America.”

The evening ended on a rousing note with Shirley Caesar and a gospel choir that had the crowd on their feet clapping and singing along.

At the conclusion of the concert, guests joined Del Vecchio and the Brooks team in the lobby for American munchies including mini hotdogs, pizza and potato pancakes — and a bite of birthday cake.