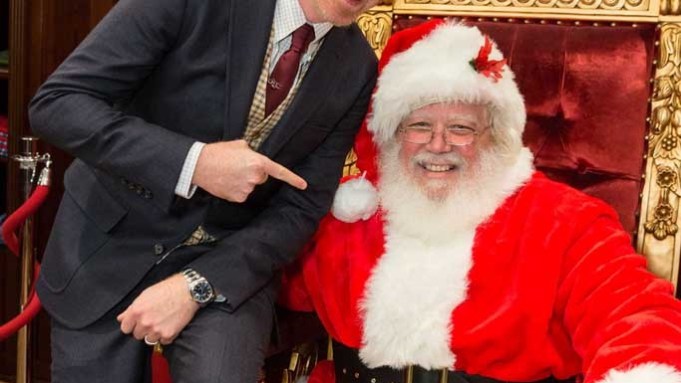 The events were part of the retailer’s annual St. Jude Thanks and Giving campaign, which raises funds for the Memphis-based hospital that specializes in the research and treatment of pediatric cancer and other deadly diseases.

In San Francisco, “Modern Family” star Jesse Tyler Ferguson and his husband Justin Mikita, and actors Colton Haynes, Abigail Spencer and Josh Pence were on hand. Thirteen-year-old Oscar Adler, son of Rock and Roll Hall of Famer Lou Adler was also flown in from Los Angeles to DJ the event.

In New York City, the Madison Avenue flagship was transformed into a winter wonderland for the eighth year in a row, drawing kids and their families to enjoy photos with Santa, cookie and ornament decorating, and balloon art. More than 600 people — including 200 children — turned out to hear a live performances by Wynton Marsalis and the members of the Jazz at Lincoln Center All-Stars, who played jazzy versions of familiar holiday favorites including “Rudolph the Red Nose Reindeer.” Gabrielle McClinton and Erik Altemus, from the 2013 Tony Award-winning Broadway musical “Pippin” sang selections from the show including “Sinful Joys” and “Corner of the Sky,” and The Boys & Girls Choir of Harlem Alumni Ensemble performed “Let It Snow,” “Joy to the World” and “Jingle Bells,” among other classics.

In both stores, 10 percent of the evening’s net sales were donated to St. Jude. Since 2005, Brooks Brothers has raised more than $8 million for the hospital.