Over the years, the retailer has raised $6 million for St. Jude by donating a percentage of sales during the holiday selling season. 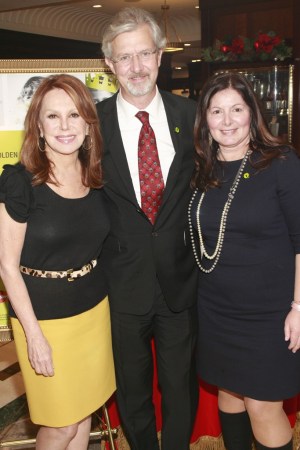 “The real objective is never really to do business, though we do a lot of business,” said Lou Amendola, executive vice president of merchandising at Brooks Brothers. In fact, he said it’s Brooks Brothers’ third-largest volume day of the year, which is no surprise, considering the festive and frenzied atmosphere of the Madison Avenue flagship. “I was running around the whole store, buying ties for Phil,” said Marlo Thomas, the actress who champions the good works of St. Jude as national outreach director, referring to her husband, Phil Donahue. “I love this event. It’s done with such love.”

Others were grabbing for the pigs in a blanket, Champagne and cocktails, or attending to their children, who were busily making holiday cookies and decorations, or sitting with Santa for photographs. Later, the crowd crammed the main floor for live performances by Wynton Marsalis and the Jazz at Lincoln Center Orchestra, by the casts of the upcoming Motown and Cinderella shows on Broadway and by The Boys and Girls Choir of Harlem Alumni Ensemble. Among the crowd of 600, helping to benefit St. Jude Children’s Research Hospital, a premier center for the research and treatment of pediatric cancer and other deadly diseases, were Brooke Shields, Oliver Platt, Paulina Porizkova, Ric Ocasek and Kenny Cooper of the New York Red Bulls.