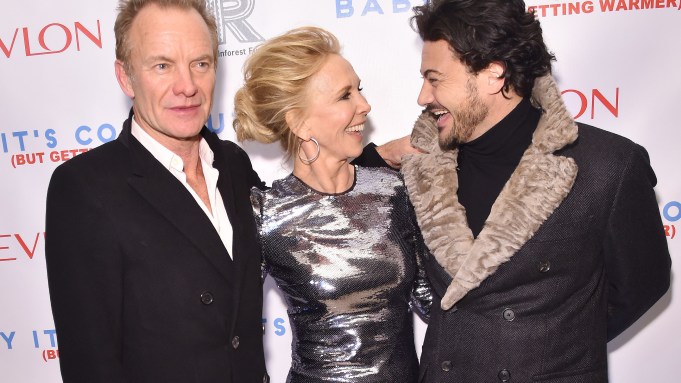 Concertgoers shimmied into their sequins for Sting’s annual holiday concert to benefit The Rainforest Fund on Wednesday in New York.

Sparkling attendees included Trudie Styler, Sting’s wife, actress Gina Gershon, plus scores of audience members who got the “festive attire” memo. Mary-Kate Olsen and husband Olivier Sarkozy, half-brother of former French president Nicolas Sarkozy, Ashley Olsen, Revlon chairman Ronald Perelman and director Paul Haggis — who stood out in the crowd for his unabashed and sustained enthusiasm — all made it to Carnegie Hall for the Revlon Concert for the Rainforest Fund as well.

The event featured Sting, also the emcee, Chris Botti, Darlene Love, the Manhattan Girls Chorus, Idina Menzel, Ronnie Spector, Vittorio Grigolo, James Taylor and Bruce Springsteen, who slid off the Perelman stage mid-act in order to continue his performance in the aisles at Carnegie Hall. Springsteen’s decent into the audience prompted one fan to jump out of her seat and run down the aisle to take a selfie with him — she kissed him on the cheek before scurrying back to her chair. But then the floodgates opened, with a significant portion of the formerly proper audience swarming the boss for selfies, which he obliged.

Song-wise, opera singer Grigolo, who is starring as Romeo in the Metropolitan Opera’s “Romeo and Juliet” stood out from the pack, walking on stage first as an unusually fit Santa and then drawing a standing ovation from the crowd.

“This is the first time that we’ve put the show on so late in the year,” Styler said. “A time full of celebration and holy days — Christian, Jewish, Muslim religious festivals bring communities together, and families, too. In winter we tend to…stay home; we gather round the people we love and if we’ve lost someone this time of year takes on a special quality. So our concert tonight, as you’ll hear, reflects not just the joy of the holidays but also the shadow of the winter solstice.”

“Until this year we’ve never been active within the United States, until Stand With Standing Rock,” she said. She made a trip to Standing Rock last month, she said, noting her support for the cause. The Rainforest Fund, which focuses on helping people protect their environments, has now raised more than $45 million, Styler said.

A smattering of guests made their way over to the Essex House Hotel afterwards for cocktails and a buffet-style dinner. Guests included Menzel, Haggis, actor Damian Lewis, Dr. Oz, who mingled with Revlon chief executive officer Fabian Garcia, and Sting, who made a late-night appearance with Styler.