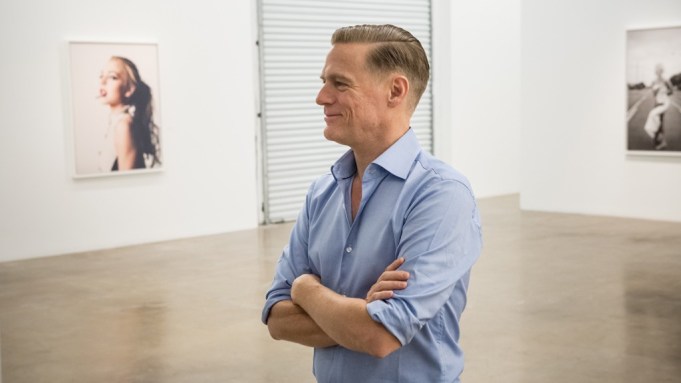 “When I start out with a blank canvas and Kate Moss walks in and takes her top off, what can I do?”

For Bryan Adams, the answer is simple: start snapping photos. A topless Moss, a grinning Queen Elizabeth sitting on a bench next to her Wellies, and Mickey Rourke in a pink suit are three of the 42 images that the singer-composer selected from his new book, “Exposed,” to display at the Goss-Michael Foundation in Dallas.

Most of the images of musicians, actors and celebrities were shot for magazines, including Marie Claire, which was his first client. Some have a spontaneous, candid quality, but Adams says they were all set up.

“This is a book of my favorite pictures,” Adams explained at the exhibit preview, following a week of performances around Texas. “Other than Mick [Jagger] and Tommy [Lee], all the subjects are people I’ve met as a result of working on photography. They’re not friends of mine. Some have become friends.”

Adams got into photography 14 years ago, by shooting self-portraits for his own album covers because he was “sick of them being done at the last minute.

His next project is far more serious: He’s been photographing British veterans who were wounded in Iraq and Afghanistan. Some of those images will debut in February, along with shots from “Exposed,” at his solo exhibit at NRW-Forum Düsseldorf in Germany.

“I’ve been working on it for two years,” Adams explained. “It’s pretty heavy. It’s all soldiers that have been injured or dismembered.…The book will be coming out later, because I’m still shooting for it. There will be nothing like this, I promise you.”