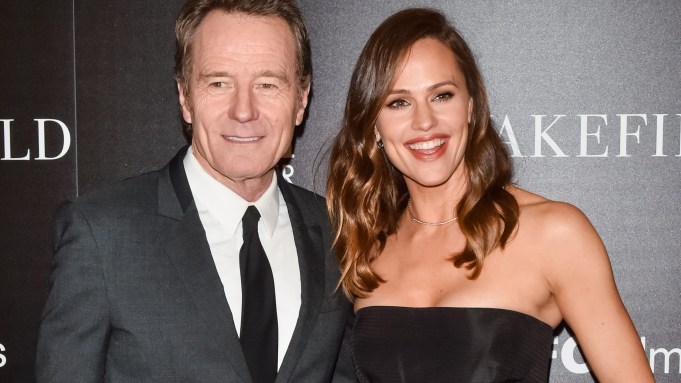 Bryan Cranston often plays fatherly characters on-screen but for many of his young costars that mentoring spirit carries on when the cameras aren’t rolling.

“It was like one huge action class on set,” explained actress Victoria Bruno, who plays the daughter of Cranston and Jennifer Garner in “Wakefield,” the actors’ latest release. “He took the time to sit with me every day to ask me what I want to learn and what questions I have.”

The Cinema Society and Fiji Water hosted a special screening of “Wakefield” Thursday in New York with guests Zoe Kazan, Rachel Roy, Fern Mallis and Johannes Huebl on hand to celebrate the moody drama, which focuses largely on lengthy and intense soliloquies from Cranston.

“I’ve been doing it for so many years and now at 61 years old I have to make sure my energy level stays high [on set] when I need it high,” explained the former “Breaking Bad” actor. “If I get a sense that I’m not going to be needed for an hour, I’ll go back to my trailer and nap for 45 minutes. We’re there for 14 or 15 hours everyday so it’s more of an endurance test than anything else.”

To lighten the daily drudgery of filming, Cranston and Garner strategically provided food trucks to deliver goodies to the cast and crew as a gesture of thanks. “Jen always has a homemade pizza truck come out to the set [she’s on] so every crew member can individualize their own pizza,” explained Cranston. “I had an ice cream truck come out and there was a coffee truck that came and made lattes. It’s a small gesture, but we don’t want the work to go unnoticed.”

Following the screening, guests convened at the Penthouse Hotel on Rivington for an after party where tequila cocktails were welcome refreshments in the unseasonably hot and humid weather.

A distant lightning storm sparked behind the Empire State Building’s silhouette as Cranston, who was dressed in head-to-toe Givenchy for the evening, waved off the notion that his role in “Wakefield” could eventually be an Oscar contender. Costar Garner stayed briefly for the post-screening party and dashed.

Cleo Wade, Herieth Paul on What It Takes To Be a Muse

Vince Gets Backstopped by Sun Capital in Stock Offering