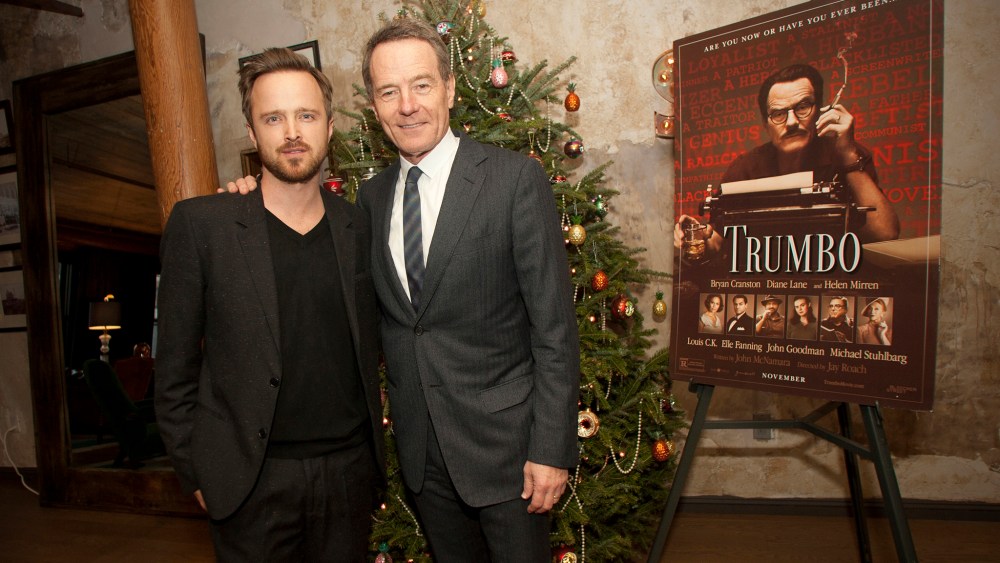 As perhaps a testament to his star power, Bryan Cranston managed to draw some of the screen’s busiest actors for a cocktail in his honor, toasting his recent SAG and Golden Globe nominations for his performance in “Trumbo.” Cohosted by Jonah Hill, Aaron Paul, Harvey Weinstein and others, the evening drew admirers and costars of past and present, including Helen Mirren and Michelle Monaghan, for Champagne and popcorn at the House of Elyx in Manhattan’s Meatpacking District.

“I had one little scene with him in this movie, but I feel like he’s a member of my family,” Mirren said of Cranston between sips of her martini. “I think he’s one of the great living American actors.”

Mirren stars with Cranston in “Trumbo,” playing gossip columnist Hedda Hopper. “Even I didn’t know the details; I knew the general thing of what had happened but I didn’t know the specifics, I didn’t know Dalton Trumbo had spent time in jail,” she said of the film, which also stars Louis C.K., Diane Lane, Elle Fanning and John Goodman and tells the story of the screenwriter blacklisted from the film industry for his Communist Party ties in 1947. “I feel it’s important for people of [a younger] generation to be aware of the dangers, even in a country that’s as free as any country you can imagine in the world,” Mirren said. “There’s always that danger of restriction and repression.”

Cranston earned a Best Actor nomination for his performance, marking his sixth Golden Globe nod — he won in 2014 for his last hurrah as Walter White in “Breaking Bad.” “It’s just out of control,” Cranston’s “Breaking Bad” costar Paul said.

“I saw the first screening of it with Bryan, which feels like forever ago,” Paul continued. “Apparently it’s changed quite a bit, but I was, of course, blown away by that beautiful man’s performance.”

Though she’s yet to see the movie, or meet Cranston, “I feel like we know each other because of the way that I binge-watched ‘Breaking Bad,’” Monaghan said. “He’s such a tremendous actor. How many protagonists do you hate but you also love?”

Cranston himself insisted he wasn’t up waiting by the phone at 5 a.m. last Thursday, as the Golden Globe nominations were unveiled. “My wife tells me,” he said. “I can’t answer phone calls — I get panicked. You get a call at 5:30 in the morning, it’s like ‘someone is dead.’”

With the number of nominations he’s received in recent years, he might be forgiven for growing accustomed to the process, but “I don’t normally pay attention to that,” he said. “I find it saner for me just to focus on doing what I do, and let other people do what they do, and if someone taps me on the shoulder and I turn and they say, ‘We’d like to recognize you for your work,’ I’m very happy. Who wouldn’t be?”

Cranston said he agreed to the film based on the script and the chance to portray such a dynamic man. “The character is amazing: flamboyant, artistic, creative, contradictory, irascible,” he said. “A wonderful blend of emotions.”

While most in attendance had seen “Trumbo,” several guests had a laundry list of the other nominated films they wanted to see, with “Room” and “The Revenant” at the top of most. “That’s what the Christmas break is for actors,” Cranston explained. “We eat, we go for a walk, we take naps and we watch lots of movies.”