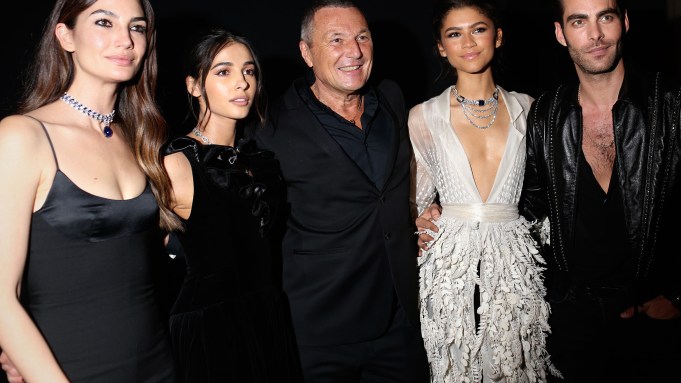 “The spirit of the campaign is ‘Mai Troppo,’ which means never too much — it’s about exuberance and personality,” said Scott, who broke out in 2019 with “Aladdin” and “Charlie’s Angels.” “It was really nice that a brand recognized that in me, and was like, ‘We like you, we like your personality, you’re not too much, we like the fact that you’re a bit extra.’” Her latest antics? “At dinner, I had a whole pizza to myself. That was pretty extra, it was off the menu. I’m usually extra when it comes to food.”

For Scott, pizza night was only half of the fun: she was also thrilled by the performers slated to go on. Becky G was the first vocalist to perform — “She’s my very close friend; I’m very, very excited, she’s gonna kill it!” said Scott — who was followed by a pregnant Ciara, complete with backup dancers and crew, and a late-night DJ set by Diplo.

“Bulgari always pulls out all the stops for their performances and their parties,” Aldridge said of the party. A more veteran collaborator with the brand, she made note of how much fun on-set she had with Zendaya and Scott. “They are so amazing — speak of the devil, hi, how are you?” Aldridge said to Zendaya, mid-creep up to the carpet. “You look so beautiful! I was just saying how excited I am we’re all together again tonight.” Zendaya also made her rounds of the evening before heading backstage, with rumored boyfriend Jacob Elordi following in tow.

“Zendaya’s my girl, I’m really excited to see her,” “Pose” actor Indya Moore said. They made it to the carpet on the heels of the Christian Siriano show earlier that evening, arriving just ahead of Becky G’s set. “And I’m very excited that Ciara’s here, I really hope I get to meet her. But I’m most excited to see me.”

At the start of Diplo’s set, hardcore fans made their way to the front, Alexander Wang among them. Counting the DJ as his favorite act of the evening, he also mentioned his love of the brand. “I did a collaboration with them last year — they’re a part of the family.”