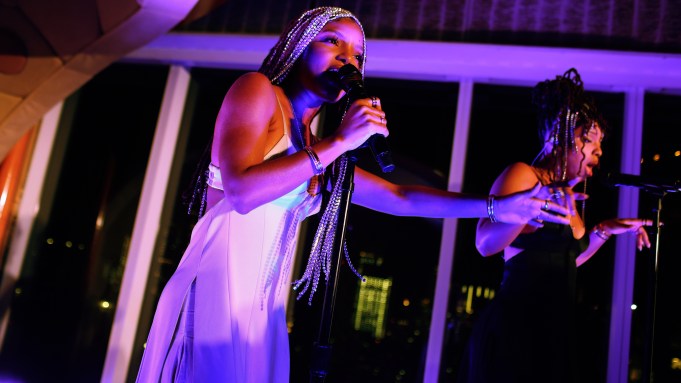 It was a common refrain at The Standard on Wednesday night, where Bulgari was throwing one of the first major parties of New York Fashion Week. After several low-key seasons, the fashion crowd was back in full force — and in celebratory spirits — at one of their favorite old haunts. Guests included Bulgari brand ambassadors Eiza Gonzalez, Lily Aldridge and Martha Hunt, as well as Dove Cameron, Irina Shayk, Amelia Gray Hamlin, Barbie Ferreira, Jordan Barrett, G-Eazy and Selah Marley. In the stairwell leading up to the Astro-turfed rooftop, Ellen von Unwerth was snapping a portrait for a guest on her cell phone.

Outside, Gonzalez was similarly game to pose for a photo op with a fan. The actress is the latest celebrity addition to the Bulgari family; she was revealed as the brand’s first Latina North American ambassador in July.

“I couldn’t find a better event to come and start fashion week with,” said Gonzalez, a single smoke machine blowing nearby. “Being part of the brand has been so exciting — they’ve been so nice and so wonderful. And I love the new collection, it really speaks to me,” she added.

In addition to kicking off New York Fashion Week’s return, the party was celebrating Bulgari’s new B.zero1 collection. Gonzalez praised the collection’s versatility off the red carpet. “I love stackable, chunky jewelry for day-to-day, but then I love to wear jeans and comfortable stuff and still look chic and elegant and fun,” she said, jostling the rings and bracelet adorning her arms for the evening. “It’s got the gold and the studs and the diamonds, sexy and fun and risky, it doesn’t feel too safe. It’s elevated, but also [for] a girl that can get down and have fun.”

Gonzalez, recently rumored to be cast in a Netflix series led by the co-creators of “Game of Thrones,” also plans to attend the Tom Ford show on Sunday, a last hurrah before she leaves to shoot her next project. But first: a photo with fellow Bulgari ambassador Aldridge.

“Are you guys sisters? No way!” exclaimed Gonzalez, as model and DJ Ruby Aldridge joined the pair in front of the lit-up Bulgari backdrop, set against views of the Manhattan skyline.

“I’m so fortunate; Bulgari’s given me beautiful pieces over the years and I wear them everyday,” said Lily, dressed in a silver-fringed Burberry suit. “That’s what’s so nice about their pieces — you can dress them up, obviously, but they’re also beautiful casually.”

The model planned to fly back home to Nashville, Tenn., Thursday morning for a few days, before returning to the city at the end of the week. But it’s not all work and no play. “It’s always nice to come to New York and get to see my sister — she’s my best friend,” she added.

Downstairs, Paul Sevigny was on DJ duty, and the crowd had swelled with industry veterans like Jordan Barrett — who threw a cashmere sweater over his shoulder and posed in front of a step-and-repeat with his arms folded for prime photo placement of his watch and ring. Despite the fashion week party hiatus, the pros still know how to play the game.

Around 9 p.m., guests were directed into the Boom Boom Room, where Chloe x Halle — decked in Bulgari — performed for the lively crowd. With nary a masked guest in sight, it almost felt like business as usual.

MORE NYFW COVERAGE FROM THE EYE:

Fantasy Front Row: Who We Want to See at the NYFW Shows