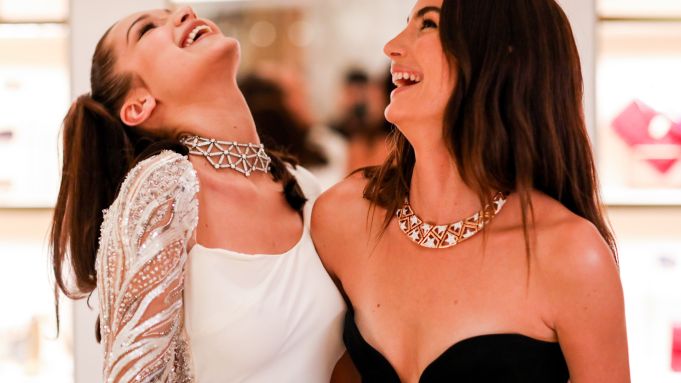 Bulgari offered a fresh take on the meaning of “uptown” on Friday night.

The fine-jewelry brand was toasting its new Peter Marino-designed flagship on Fifth Avenue with a two-part event — a cocktail party at the store, followed by a dinner in a mystery location. The brand was even keeping its VIP guests — Ciara, Laura Harrier, Lily Aldridge, Misty Copeland and Jasmine Sanders — in the dark.

“Secret location,” said Harrier from the packed first floor of the boutique. “I don’t know where I’m going to end up. I’m just going to get in the car and see where they take me — I think it’s uptown, uptown.” The actress had dressed accordingly, pairing a hand-embroidered suit with the requisite Bulgari jewels.

“It’s an uptown night, I wanted to dress the occasion. This is my Upper East Side lady look,” Harrier added. “It’s cool to be associated with a brand like this and play, and do things you probably wouldn’t normally do in your everyday life,” she continued. “I’m like, who am I? Why am I wearing all these diamonds? It makes me so nervous.”

To be sure, there was big money floating around. Bella Hadid stopped by for part one of the evening, settling into a couch on the upper floor where she sipped Champagne and mingled with admirers. “You look amazing,” gushed Ruby Rose from the DJ deck as she embraced the model, who is also the face of Bulgari’s new fragrance Goldea The Roman Night.

Just shy of 8 p.m., the crowd began filing out of the store and into the black mini buses lined up on 57th Street to be whisked away to dinner. Uptown — where could it be? Central Park?

A good while later, the buses pulled up to the Met Cloisters in Fort Tryon Park at the very top of Manhattan.

“First I was like, ‘Where are we going, it’s so far away,’ but I knew that it was going to be something really good because they never let you down,” said Bulgari global digital ambassador Jasmine Sanders, surveying the dinner setup at the Renaissance museum. The brand had set up rows of bronze-lit tables around the museum’s open-air courtyard. “It’s one for the books,” she concluded.

Bulgari had even more surprises up its sleeve, although by the time dessert hit the table the crowd was already dwindling to an “intimate” level. Dancer Lil’ Buck performed in the courtyard — much to Copeland’s delight — before the finale: a striking performance by Demi Lovato in the museum’s candlelit Fuentidueña Chapel.

Well, that wasn’t quite the finale. The brand still had to deliver the crowd back downtown to 57th Street and Fifth.