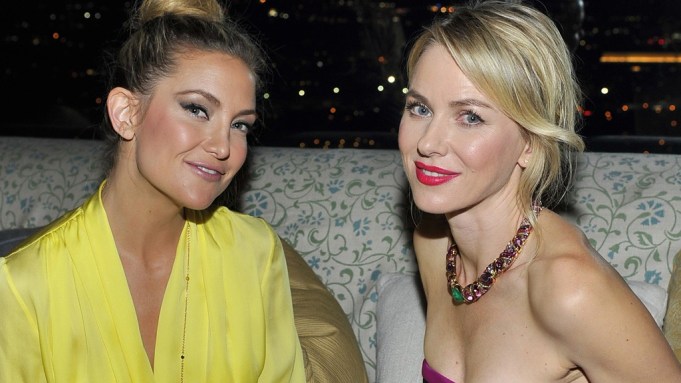 THE FESTIVITIES BEGIN: The Academy Awards are no longer limited to a weekend of festivities. They now take up almost a whole week, and this year it kicked off Tuesday with Bulgari’s “Decades of Glamour” party at Soho House in L.A.

For the occasion, the photo-booth snapshots that normally cover the hallways were replaced with 8-by-10 glossies of movie stars in the brand’s jewels. On the garden terrace, vitrines displayed the actual goods, and just as many baubles adorned guests, including Naomi Watts, Kate Hudson, Emmy Rossum and Ashley Greene. As hostess, Watts claimed the biggest necklace, a gold collar with cabochon rubies and emeralds.

“I chose it because it felt strong and elegant but not over the top,” she said. “Their pieces are so classic. I love knowing that it’s been around and stood the test of time.” The starlet Camilla Belle, also milling about, concurred.

“You think about these iconic images, like Elizabeth Taylor wearing Bulgari in the Old Hollywood days, and they continue to impress,” she said as she peered into one of the cases. A video reel was playing that featured Taylor and Richard Burton in their heyday. “There is kind of this old-fashioned elegance to giving jewels as gifts,” Dianna Agron said of Burton’s extravagant gifts to Taylor. “I don’t think it’s of as much importance to men these days but it’s certainly a very romantic idea.”