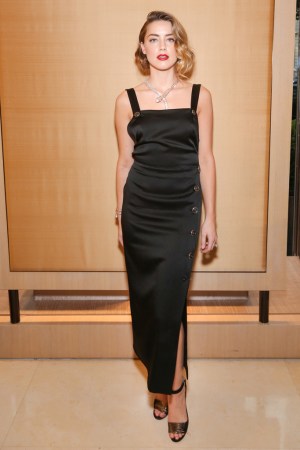 PARIS — “It’s hard to do a catwalk in a store,” Bulgari chief executive officer Jean-Christophe Babin shouted over the din at Bulgari’s flagship on Avenue George V in Paris.

The executive was keeping an eye on a group of models draped in million-dollar jewels as they frayed their way through guests and waiters proffering trays of Champagne and hors d’oeuvres. Toby Huntington-Whiteley — brother of Rosie — was among the male models sporting watches.

Celebrities including Amber Heard, Juliette Binoche, Michelle Rodriguez, Valeria Golino and Carina Lau attended the crowded event held during Paris Couture Week to present the Roman jeweler’s new Giardini Italiani collection, for those who did not make the preview in Florence in June.

Naomi Watts and Clotilde Courau already wore some of the pieces at the Cannes Film Festival in May, but Babin admitted it was a risky strategy. “It’s double-edged, because the clients usually want to see the piece first and exclusively and they don’t like so much the idea that the piece has been worn by someone else before,” he said.

That did not prevent him from strategically placing more jewels on his guests. Heard, who is married to Johnny Depp, was resplendent in a Serpenti necklace, bracelet and ring that jointly boasted more than 130 carats of diamonds. “It might give an idea to Johnny — a nice gift,” Babin noted.

“This is truly the most beautiful necklace. I’ve never seen anything like it, ever,” marveled Heard, wearing a Temperley London pinafore dress. “I like things that are one of a kind,” the actress continued, revealing that she took advantage of her stay in Paris to pick up a vintage dress at a flea market.

Heard was on a pit stop in her global promotional tour for “Magic Mike XXL,” in which she stars as a photographer named Zoe who gets friendly with Mike, the titular male stripper played by Channing Tatum. Talking about the movie made her realize that men seem to deal better than women with being turned into sex objects.

“The posture of being objectified is less marginalized, is seen as less victimizing, is seen in a more empowered light, when men — as in our movie — fill this position, one that is typically reserved only for women. We, as the audience, are forced to recalibrate our judgment of the situation, or lack thereof, I should say,” she mused.

“I love working with her. She is so creative and I love her energy,” he said. “If you see the video, it’s done in five takes, you know, like five parts, and we did everything the same day at the Boom Boom Room in New York. It was hard, but the atmosphere was like a real party, and I think you can see that in the video.”

Kortajarena will get a chance to show off his acting chops opposite Penélope Cruz in “Ma Ma,” set for a September release. She plays a mother battling to overcome tragedy.

“She’s trying to feel alive when she is with my character, so my role is a small one, but I felt very good being part of this story because seriously, when I read the script, I thought it was the most beautiful script I ever read in my life. It made me feel so many things only reading it, so when the movie comes out, it’s going to be amazing.”